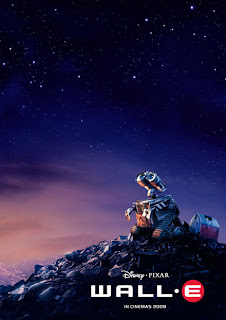 There are few things in life I anticipate more than a new PIXAR movie. Anything penned by Joss Whedon maybe (Buffy Season 8 and Dollhouse for example); anything with Kate Winslet in it (Revolutionary Road and The Reader I’m looking at you!); but little else. Just think: I have been looking forward to Wall-E months before you even know it was coming out (don’t believe me? I’m already looking forward to the next couple of PIXAR releases: Pete Docter’s Up! (2009), Rydstrom’s newt (2011), Chapman’s The Bear and the Bow (2011) and of course Toy Story 3 (2010) – so sue me, I’m kind of a PIXAR geek, like you didn’t know that already!). 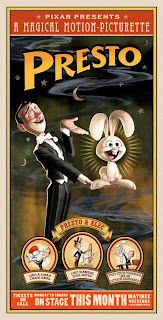 But first things first, Wall-E was preceded by Doug Sweetland’s Presto (now available on iTunes). If you have been following the PIXAR shorts since Geri’s Game, you probably know that you can usually depend on them being hysterical (think For the Birds, Lifted), beautifully crafted (think One Man Band) and full of cuddly characters (think Boundin’). Presto doesn’t disappoint. The premise: a magician – famous for his magic hat trick (his top hat and a wizard’s hat are magically connected!) forgets to feed his rabbit Alec before that night’s performance and Alec decides that he won’t collaborate until he is feed. Hilarity ensues. What’s great about this short is that Alec is very expressive and mischievous (think of him as PIXAR’s Bugs Bunny) and just to see him miming “give me my carrot or else I won’t go into the hat” is a laugh-out loud moment that is only matched by the way the magician’s trick ends to roaring applause from the audience. A-

Feature Presentation
I know you might think I’m just going to say that PIXAR can do no wrong (I mean, when you’re ‘worst’ movie is still as visually exciting and enjoyable as Cars, you know you can expect a level of quality that other franchise/superhero/blockbuster studios may not even recognize) because I am an animation junkie. But I’m also going to say it because it’s true. I grew up with PIXAR’s films – and learnt a thing or two on the way and have found something(s) I loved in each and every one of them: Mr Potato Head and the toy-story in Toy Story, the colour palette and Kevin Spacey’s scary voice in A Bug’s Life, Randy Newman’s music and the traffic cone sequence in Toy Story 2, Boo and the character designs in Monsters, Inc., Dory and the visuals in Finding Nemo, Edna and the action sequences in The Incredibles, Luigi and Guido in Cars, and Remy and Michael Giacchino’s music in Ratatouille. Of course there are more things, but what’s amazing about PIXAR’s productions is the way that in listing things you love about their movies, you can never really match the totality of the films at hand: how to explain to someone the seagull scenes in Finding Nemo or the bond Boo and her ‘Kitty’ share in Monsters, Inc. without somehow doing the films a disservice?

Which is why even if I were to list the things I loved about Wall-E: the sound design – only the guy who gave us R2D2 would have been able to bring Wall-E to life!; the cinematography – oh Roger Deakins, thank you!, the amazing opening sequence, the curious personality of the eponymous robot, the fact that EVE kicks ass, the heartbreaking moment at the end that had me at the verge of tears, the Hello Dolly! clips, the eclectic and lovable nature of the supporting cast (I love M-O), the expressiveness of the robots, Thomas Newman’s music… I don’t think I’d be able to convey the love I felt for the movie once I left the movie theater (after an amazing end-credits sequence – PIXAR doesn’t even allow you to be bored when you’re supposed to be trashing your XL popcorn receptacle and leaving!).

Stanton and his team (because I really believe animation is first and foremost a cooperative art medium) have crafted a beautiful film that moves from slapstick (Wall-E running from shopping carts, Wall-E and umbrellas during thunderstorms) to romance (has any other character in film history wanted to hold someone’s hand so badly?) to Sci-Fi (how cool are the ships and robots?) to eco-friendly and anti-corporate messages (Buy-n-Large who?) to animation wizardry (Stanton has done to space what Brad Bird did to Paris last year – making it beautiful, romantic , animated and still realistic)… I could go on. But I would be wasting your time, because seriously: you just need to watch this animation-classic in the making. A+