W.’s ABC’s or How it’s a Political Alphabet 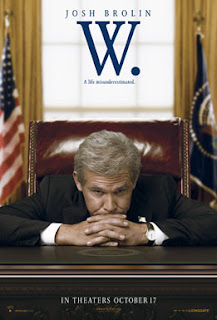 W.
Directed by Oliver Stone
Written by Stanley Weiser
Starring: Josh Brolin, Elizabeth Banks, James Cromwell, Ellen Burstyn, Toby Jones, Richard Dreyfuss, Thandie Newton, Noah Wyle, Jesse Bradford, Jeffrey Wright, Ioan Gruffud… and the list goes on and on.
Instead of a full-review I thought I’d do something a little bit more fun. And what is better than LEARNING? Nothing right? So in that spirit, for those of you learning your Dubya’s ABCs here’s an alphabet for the film.

A is for A-List talent involved: Stone, Brolin, Banks, etc. and a great supporting cast (even in small roles!) that saves this film from being a simple exercise in political/cultural history without really being an engaging or interesting film.

B is for Banks, Elizabeth who works hard at becoming Laura Bush – who sadly post-marriage (and post-BBQ in the film) isn’t really much of a character.

C is for Close-ups. Stone privileges these all the way through and it helps at times since up close Brolin’s face kind of takes a Bush-look. But at other times I kept thinking: why?

D is for Dick Cheney (played by Richard Dreyfuss) who is shown to be the bat-shit scary, creepy guy he is.

E is for Ellen Burstyn who is always a breath of fresh air in any and every movie she’s in and here she sparkles as Barbara Bush with her delicious line readings.

F is for Food. Hard not to notice that Stone surrounds his film with tons of eating/drinking scene. But I wonder: is it a metaphor for consumption? Excess? Hunger? Help me out here.

G is for Gruffud, Ioan who shows us what Tony Blair would look like if he were a million times more attractive.

H is for H.W (played by James Cromwell) along with Burstyn, he makes the family scenes all that more believable – even if they’re playing with cliches that go back to Socrates.

I is for “Iraq is not Iran. I know that much” which still cracked me up even after I’d seen it in the trailer so many times before.

J is for Jesse Bradford … with a paddle! Surrounded by men (some scantily clad and soaking wet!)

K is for Karl Rove (played by Toby Jones) is a self-described “fairy” (as per the dialogue in the movie… though sadly not a fairy-fairy, just a right-wing political Rovian fairy…) But seeing that Toby also played Capote… it left me wondering.

L is for Lots of drinking. Jack gets around in this film.

M is for Musical Score (by Paul Cantelon). It’s actually so good. I’m thinking this and Brolin have the best shots at garnering any love at the end of year awards.

N is for Noah Wyle? Seriously? I had no idea… Stone really threw me for a loop with ER’s fave alum.

O is for Oedipus Complex – I need not explain this right?

P is for Palin = Bush? They both love running and staying in shape; love Joe-Voter, believe in “Ameri-cuh,” hate “nukular” weapons and interweave seamlessly their religious beliefs into “secular” politics.

Q is for Quel Surprise! (ie. I’m using Q for Jeffrey Wright regardless) – as Colin Powell he is believable and conflicted (the only one!)

R is for Rookie not a Pro – is that what Stone wanted us to take from:

S is for Sports Metaphor (Baseball!)? I mean, those scenes in the ‘field’ are illuminating but they function too didactically to be efficient.

T is for Thandie Newton (as Condolezza Rice) is a hot mess. Was she playing Rice as a drag queen on purpose? There’s a line between imitation done well (Tina!), imitation done believably (Josh!) and imitation as camp (sadly… Thandie!)

U is for Underwhelming overall. Really I don’t know what I was expecting, but all I got was at most a competent attempt at character study that fails at making it to the (history/film) books. Entertaining yes, but not all that great.

V is for Vendetta and it kinda does feel like Dubya’s presidency was just that… revenge against his father, and I don’t know how satisfying that is…

W is for Dubya, played by Josh Brolin, who really is amazing as Dubya. And it’s not just the swagger and the makeup and the voice… it’s the ease with which he achieves this – unlike someone else on the cast (see T). You got give ‘im props for almost… almost making you sorry for the guy who’s done so much cultural/political/national harm.

X is for X-nay on the Ating-Hay. Stone does try and have it both ways… it’s not a complete mockery, but even in the “serious” scenes the character and the dialogue play like a comedy. A dark and sad comedy when all is considered. Dubya might be a jester but his laughs have real repercussions.

Y is for Yale. How fitting I was in New Haven when I chose to watch this – even if the crowd at the Criterion could easily have been H.W.’s age…

Z is for zZzZZz Phew! That was tiring… I’m sleepy now.