Vicky Cristina Barcelona, or How Penelope will fuck you up! 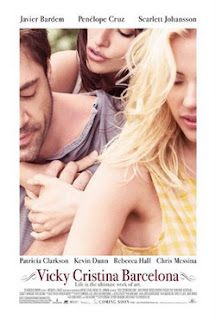 Vicky Cristina Barcelona
Directed and Written by Woody Allen
Starring: Javier Bardem, Rebecca Hall, Scarlett Johansson, Penelope Cruz and Patricia ClarksonOkay so the title is a bit of a mouthful. But then, this is a Woody Allen comedy, n’est-ce pas?VCB begins with – what else? – Vicky and Cristina moving into Barcelona for the summer. Christopher Evan Welch, acting as Allen’s narrator/voice-over lets us into Vicky and Cristina’s minds and attitudes towards art, life and love. Now, while at first I found the voice-over a bit too much, I stopped noticing it after a while, and realised that it was organically tied to the way the plot and the characters moved forward rather than a cop out for giving us information we wouldn’t have gotten any other way.

But the story doesn’t really pick up until boy’s ex-wife comes into the picture. The moment Penelope Cruz walks on screen, the picture gains a level of energy and vibrancy that only Ms Cruz could have brought with her. Her Maria Elena is unstable, frantic, psychotic, sensual, dangerous and sexy all at once. You can say all you want about Woody Allen (that his films are pretentious, that he’s not that funny or that sexy, that he’s a mysogynist) but I dare anyone to watch the scenes Cruz has on this film and deny me the fact that Allen is a master at eliciting such natural and electric performances from gifted actresses as he does with Cruz (and I would add Hall and Johansson here too, but Cruz is the woman to watch). Just like her character adds a sense of balance and artistic flair to Juan Antonio’s painting and Cristina’s photography, Maria Elena’s imbalance offers Allen the perfect touch to give this ‘romantic comedy’ an edge without which it would have just been a sexy (albeit quite sexually neutered) romantic fling film with pretty stars in an even prettier setting. A