The Dark Knight (IMAX), or How bigger IS better! 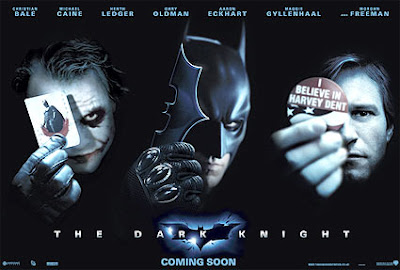 The Dark Knight
Dir. Christopher Nolan
Written by: Chris & Jonathan Nolan (Story by C. Nolan and David Goyer)
Starring: Christian Bale, Aaron Eckhart, Gary Oldman, Maggie Gyllenhaal, Morgan Freeman, Michael Caine and the late Heath Ledger.
With all those shattered box office records and a 96% on Rotten Tomatoes, is there anything left to say about Christopher Nolan’s The Dark Knight? Probably not, but here I go offering my two cents regardless [spoiler-free!]

On Heath Ledger: Sometimes – not always – a performance not only lives up to the hype, but it supersedes it. I had been a fan of Ledger’s work ever since he sung and danced his way into Julia Stiles’ heart way back when, and his Ennis Del Mar is soul-crushing, but who knew he had that psycopathic, anarchic force of nature that is The Joker inside him? A treat to watch whenever he’s on screen, Ledger transforms an age-old character from campy yet scary to fucking scary yet macabre-y funny. I don’t know about an Oscar, cause really his performance will outlast any gold-coated naked man.

On Christian Bale: It must be hard to be hearing all about your co-star when your performance is the anchor of the film. But I’m sure Christian is a good sport and must understand why his performance (and his character) are sort of pushed to the background in this sequel: isn’t that what the movie is all about: having Batman recede into the darkest corners of Gotham City? Still, his Batman is still scary (especially when he’s dangling people in rooftops) and his Bruce Wayne is still a jerk to perfection.
On the rest of the cast: Can we just talk about how no other summer movie (or any movie in general this year so far) has offered a better ensemble cast? Sure, Ledger does offer the meatiest role/performance and Bale shows us that he has the chops to carry the cape, but how about Eckhart’s White Knight turned revenge-seeking Two Face? Or Oldman’s troubled Lieutenant Gordon? Or Gyllenhaal’s lovely and spunky Dawes? And trust Freeman and Caine to offer small yet textured roles (Supporting Actor Oscars don’t come along for no reason y’know?)

On the IMAX experience: Uh… it’s Batman, just bigger! and better! How can an IMAX-sized Christian not be a good enough draw? True, the skylines and the sequences shot in IMAX are amazing and breathtaking (I really felt like I was falling into Hong Kong! and how cool was the Bat-pod scene?!) but seeing a giant sized Christian did it for me.
On the movie overall: I’ll leave it up to fanboys and other ‘net crazies to ponder over whether The Dark Knight is a right wing terrorist basher, an exploration on anarchy and bureaucracy, on the pathos of heroism or the self-effacing power of evil for evil’s sake. For me it was an intense crime drama that had more to do with (dare I say it?) past Oscar Winners The Departed and No Country for Old Men than with Spidey and Iron Man. The canvas is so vast, the storylines so intricate, the characters so lived-in that the fact that Bruce dresses up as a Bat seemed like just an added bonus to this clever nuanced vision of a world that seethes with evil and the few that make do and still try and do good.
“You either die a hero or live long enough to see yourself become the villain” says Harvey Dent – sadly in Gotham (an allegory of the world?) people are more interested in living longer than in being heroes… A+