Teenage Mutant Ninja Turtles, or How Everything I Know I Learnt from Animation

Because who doesn’t love turtles?

This post was inspired mainly by this. To quote the Rutgers university paper, the Daily Targum: “More than 700 students relived a favorite childhood television series last night as they dressed as Michelangelo, Leonardo, Raphael or Donatello in a successful attempt to break the Guinness World Record for the Largest Gathering of People Dressed as Teenage Mutant Ninja Turtles.”
I was just glad to see I wasn’t alone in still reminiscing about those turtles – so much I even supported my girl Sarah Michelle Gellar last year and saw TMNT in theaters! And it was good. And so I give you:

Top 8 Things I Learnt from the TMNT 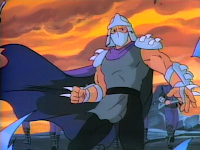 1. You can survive on just Pizza – and hey, when you’re growing up someone has to tell you this. Add that to the fact that I now live within Papa John’s delivery route and you have one happy camper.
2. Turtles are cool. But you know what’s cooler? Mutant turtles! And you know what’s cooler than that? Mutant NINJA Turtles!
3. It taught me about Japanese weaponry. How else was I suppose to learn about Katanas, Bo staffs, nunchakus and sai daggers? Exactly.
4. Purple is code for ‘the smartest one of the group.’ So if you see me wearing a lot of lavender, blame/thank Donatello… and okay, maybe Shredder. But can you blame me? Look at those arms!
5. Stay away from angst/angry Hockey-Mask wearing, Hockey-Stick wielding New Yorkers. Life Lessons, I tell you. Life Lessons. 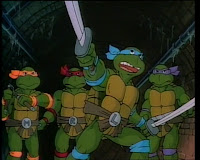 6. Brains are dangerous. I mean, that was what I supposed to take away from Krag… right? Or maybe it was a more Cartesian proposition: the mind needs its body or else it’ll be corrupted? I could buy that.
7. Girls in yellow-jumpsuits (whether or not they’re voiced by SMG) are ass-kickers. This was of course only strengthened by that Uma-Quentin creation in Kill Bill, and one has to wonder whether Quentin was not only harkening back to Game of Death but also to Ms O’Neil.
8. “Cowabunga” is a word. Bart might have given me “Ay Carumba” but I do appreciate the TMNT by giving me Australian slang that, according to wikipedia is an expression of surprise or amazement, often followed by “man”
Example: Cowabunga man! I love me some TMNT!