Synecdoche, NY or How Meta Can You Be? 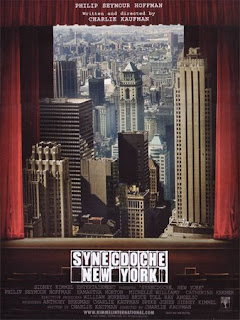 Synecdoche, New York
Written and Directed by Charlie Kauffman
Starring: Philip Seymour Hoffman, Michelle Williams, Catherine Keener, Samantha Morton, Hope Davis, Diane Wiest, Jennifer Jason Leigh, Emily Watson.
Kauffman’s directorial debut is one of those films that come every once in a while that demands an astute, patient and intellectual audience. It’s a thinking-person film, which makes it odd at times, self-indulgent at others and kind of indecipherable at others. Think Lynch’s Mullholand Drive or Arnosfsky’s The Fountain. The set up: Hoffman’s Caden Cotard is an aging hypochondriac theater director whose wife Adele (Keener) is slowly moving away from him, whose work is not as rewarding as he would like and who wants to do something ‘important’ with his life. When opportunity knocks in the form of a Genius grant Caden decides to stage “real life” in a gigantic warehouse where the… I guess I could try and work through the plot details, but I don’t think a synopsis does justice to Kauffman’s work (have you ever tried to explain Eternal Sunshine of the Spotless Mind or Adaptation to your friends and realised just sitting them down and showing it to them was more efficient?)

As JA from MNPP says in an interesting write-up about the film, Kauffman’s film is an experiment in meta-filmmaking, showing us what happens when a character so invested in art-creation intends to transform his life into life-as-theater, all the while showing us his life-as-film – just as Kauffman’s earlier films, Synecdoche, New York is a sort of Chinese doll.
The performances and the writing really make the film work – even if it doesn’t “work” in the conventional sense of the word; it works in that self-contained way Caden’s “theater piece” works. Kauffman’s scripts have a way of getting actresses to give interesting and off-kilter performances (think Meryl in Adaptation, Kate in Eternal Sunshine, Cameron in Being John Malkovich) and here, Michelle Williams as the wide-eyed actress who falls for Caden, Keener as the fed-up wife who flees to Germany to become successful, and Samantha Morton as the smitten assistant excel in creating lived-in and real characters in the midst of Kauffman’s fantastical world where tattoos wilt and houses are constantly on fire.
These are all different ways of saying: it’s a movie worth watching. B++
…and one which I still have at least one untested theory on [Emphasis on the untested part]:
– Caden is actually a homosexual whose fantasy/film/theater life is a constant push-back against this (Random clues? Nowhere in the ‘real world’ would Michelle, Catherine and Samantha do/love Philip I’m sorry… add to that Caden’s daughter death-bed speech, Caden’s male-assistant who seems to be a male version of Hazel: could Hazel be the female version of him? Also this would be a way to reconcile the Ellen/Caden switcheroo…? no?)