Southland Tales, or How This is How the World Ends… 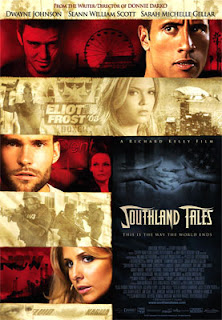 Now if the above cast list has not confused you enough, I have not done a good job of highlighting the crazy anti-type casting choices which Kelly has arranged for his newest directorial attempt (the first since his cult-classic Donnie Darko hit screens in 2001).
To try and make sense of this movie is futile. It begins – in Star Wars fashion – with Chapter IV ‘Temptation Awaits’ (the first three can be purchased as a 360-page graphic novel ‘Southland Tales: The Prelude Saga’) and thrusts the viewer into a world concocted to dizzy, confound and admittedly bewilder him with stats, faux-US history all framed as an interactive website. Giving a plot-summary would be futile – all you have to know is it involves a not-so near future, political

struggles, drug, anti-Marxists, a movie script and the fourth dimension…
You have to admire a film-maker for so earnestly trying to weave together so many stories, so many characters into a story (and a world) that seems to privilege chaos and mayhem over logic and coherence (two things the movie inadvertently (?) shies away from). As a movie it doesn’t work. Too many loopholes, too many plot strands, not enough character development, etc. But as a movie-going experience it was quite a treat. Once you take it in its own terms (granted Kelly wanted those terms to be satire and camp) you have in your hands a movie full of crazy one-liners, a series of ‘did I just see that?’ scenes and performances that you have to admire for their willingness to participate with Kelly in this roller-coaster ride.
How else is one to enjoy an ad that shows you graphic car on car sex? or a drugged out Justin Timberlake lipsynching to The Killers? or a choreographed dance sequence between Gellar, Moore and Johnson in a zeppelin?
And yet, it has its moments of brilliance:
– Amy Poehler yelling at Cheri Oteri: “Just because it’s loud doesn’t mean its funny!”
– SMG’s ‘Teenage Horniness is not a crime‘ music video (or ANY scene with Ms Gellar really, whose portrayal of ambitious Krysta Now is one of the highlights of the movie – mainly due to the fact that she has the funniest lines in the movie and makes the best of the erotic ingenuity of her character)
– The moments of meta-cinematic commentary where staged/scripted scenes play themselves out for real as if the fictional and the real were always intertwining (the double murder scene or the entire movie for example)
– The very plausible (and scary) Orwellian scenario of USIdent (a surveillance agency under the guise of a national security think-tank)
And yet, there is much to hate in the movie – the anti-type casting, which in any other scenario would have been welcome seems to stretch itself thin sometimes – I have way too many good memories of the funny SNL girls that their performances kept jarring me; I could also have done with less Timberlakean biblical narrative (the ‘messiah speech’ at the end seems kind of ludicrous given the camp element of it all); I also didn’t enjoy Johnson’s twitchy and comedic-paranoiac performance – only Gellar, Scott (in a double role) and Richardson stand out for me as performances that at once understand and subvert the different tones and genres within which Kelly is working.
To say that the movie fails miserably is an understatement, but just like INLAND EMPIRE last year I think the movie is just too much in Kelly’s mind and ends up looking like a scattered effort that flashes brilliantly at times, that is, when it is not covered in the same special effects mist that clouds the screen so many times throughout the movie.