Queering Disney, or How Walt’s Villains play for our team 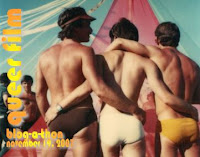 This post is part of Queering the Apparatus ‘Queer Film Blog-a-thon‘ so don’t stop here – go check out what QTA & co has to offer by visiting the Blog-a-thon’s HQ and browsing through what is bound to be a great selection of musings on/about Queer Films. 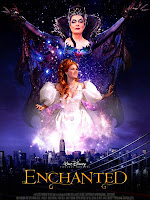 Seeing how Disney’s Enchanted opens this Wednesday (featuring a much touted about Amy Adams performance and lest we forget the work of hottie James Marsden) I have been bombarded with images of Ms Susan Sarandon’s Queen Narissa; the newest addition to the pantheon of now (in)famous Disney Villains.
Now, much has been said of the horribly traumatic influence the Disney Princesses (except maybe Mulan and Belle) can have on young girls’ notions

of femininity and much has been said of the stereotypes of ‘queer villains’ in mainstream movies (think Notes on a Scandal, Silence of the Lambs) but little has been said of the impact of the long list of ‘queer’ villains in the Disney animated features. This post is a rumination on these questions – at once provisional and provocative, more so than exhaustive and conclusive…
The Drag Queens

According to good ol’ Wikipedia a “A drag queen is usually a man who dresses (or “drags”) in female clothes and make-up for special occasions and usually because they are performing or entertaining as a hostess, stage artist or at an event.” Now, of course Disney has never portrayed men in drag (does the Genie count? does Timon count?… not really men, though) – but what I want to suggest is that a handful of Disney villains are configured as drag queens – flamboyant entertainers who exist as if to display themselves to an audience, not just because of their overexpressive faces and their overly detailed costuming but because they exist in performance, always spotlit, always on stage.

Among the many to choose from we can readily think of Ursula, the sea witch from The Little Mermaid who more readily than the other contenders (the crazy Yzma, the stylish Maleficent and the fashionista Glenn Clo… ahem Cruella DeVil) epitomizes the ‘drag queen’ persona, mainly because it has been openly stated that she was modelled after John Waters’ own Divine. Take a look at the Ursula from the Broadway version and you’ll clearly see this has not been lost in translating the show to the stage. But in the movie, you just have to look at the ‘Poor Unfortunate Souls’ scene, hear Pat Carrol’s voice and you’ll instantly feel she’s crooning at a gay bar singing to the ladies in the audience about how to land a man:
The men up there don’t like a lot of blabber
They think a girl who gossips is a bore!
Yet on land it’s much prefered for ladies not to say a word
And after all dear, what is idle babble for?
Come on, they’re not all that impressed with conversation
True gentlemen avoid it when they can
But they dote and swoon and fawn
On a lady who’s withdrawn
It’s she who holds her tongue who get’s a man

In trying to come up with a term that would apply to all the villains I had in mind (Scar, Frollo, Captain Hook, Jafar, Hades among others…) I decied on ‘asexual dandies’ – mainly because these are men (and lion) who are asexual (while the princes are all ga-ga over the leading ladies, all these villains pursue them not romantically or sexually but for ulterior motives: does Scar care for Sarabi? Jafar for Jasmine? Hades for Meg? Exactly…) and have a flare that evokes the late victorian dandies (men who placed particular importance upon physical appearance, refined language, and the cultivation of leisurely hobbies): isn’t Scar decadent? Jafar a stylish freak? Hades a fast-talking wit-slapping flaming… er, god?

I wanted to focus on Scar mainly because seeing Julie Taymor’s The Lion King Broadway Production cemented in my mind the idea of him as a queer villain. I mean, hyena go-go boys can’t be all that subtle, right? Just like most of the other male villains portrayed in Disney films, Scar is oddly asexual in a narrative that focuses on sexual as well as social maturation (isn’t Can you feel the love tonight one of the few love/sex scenes in Disney history?). Where heterosexuality is what drives the Simba/Nala narrative, Scar is always on the sidelines trying to at once delay and overpower their heteronormative union; just like Voldemort, Scrooge and Captain Hook in Lee Edelman’s No Future, Scar functions as the queer antifuturism counterpart to the innocence and drive to mate and reproduce we find in Simba. As Edelman tell us “The Child… marks the fetishistic fixation of heteronormativity: an erotically charged investment in the rigid samenes of identity that is central to the compulsory narrative of reproductive futurism” (21). This of course would apply to any of these villains – their queerness lies not in their sexuality (which we should not rule out of course) but in their characterisation as unmarried, childless, asexual males that functions to contrast with the virile, heterosexual coupling in the films and their focus on futurism (that ‘Circle of Life’ stuff in The Lion King, for example); in that promise of the future in the figure of a child (why else would the movie end with a newborn lion cub?)
The queers seem to be out to get us in Disney films, we SHOULD be prepared:
Be prepared for the murkiest scam
Meticulous planning
Tenacity spanning
Decades of denial
Is simply why I’ll
Be king undisputed
Respected, saluted
And seen for the wonder I am
Yes, my teeth and ambitions are bared
Be prepared!