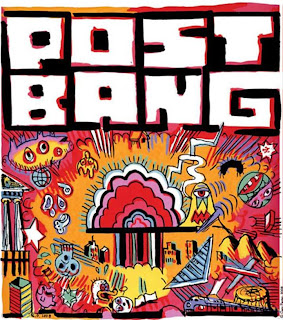 Blogging about an academic symposium – it seems like an attack on everything I get taught in grad school, but I do feel that the more interesting part of a panel like this is the interactions and the personal reactions from the audience (consider it [retroactive] liveblogging in an academic setting).
5:30-6:45 Comics and the Internet
Kent Worcester (moderator, co-editor of Arguing Comics: Literary Masters on a Popular Medium), Sarah Boxer (writer for The New York Times and editor of Ultimate Blogs: Masterworks From the Wild Web), Shaenon Garrity (webcartoonist best known for Narbonic and editor of Modern Tales) and Hope Larson (webcartoonist best known for the award-winning Salamander Dream and co-founder of SecretFriendSociety) [Siva Vaidhyanathan was scheduled to be part of this panel, but couldn’t make it]

Worcester, panel moderator, began by admitting that he probably the person least qualified to chair a panel about comics and the internet considering he is very techno-illiterate and confessing to just getting on Facebook. That said, Worcester seemed genuinely interested in the ways comics interact with the Web and set about making the panel think about the ways the internet may have affected comics as a medium; financially and aesthetically, thinking in particular about the changes in their production, distribution, consumption and even about the way fan culture has changed since the Web hit it big (think: forums & message boards!).

Following Worcester’s encouragement each woman in the panel (“And how great is it that we’re not talking about being a woman in comics?” asked Hope to her fellow panelists) to give a brief bio giving us some background as to how they got involved with the internet and comics:

Hope confessed that the main reason she started publishing her work on the web was in order to find a print publisher – which she did, and now she mainly uses the Web to promote her work.
Shaenon (an editor of comics by day) says that she makes webcomics in the form of daily strips in the same way print-comics are made and made it clear that Narbonic and her other creations come more from a place of enjoyment rather than financial drives (“I’m not really good at the whole entrepreneurship part of webcomics” she said, to which Hope echoed: “I mean, you can make ‘good’ money on webcomics, but it’s a lot of work. It being mostly merchandising and stuff.”) Shaenon also spoke of the feedback aspect of publishing her comics online: she enjoys hearing what her readers have to say in form of comments, for example. 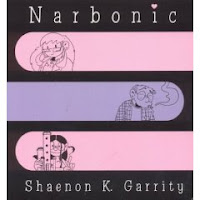 Boxer, a webcritic for the NYTimes (but more interestingly a graphic novelist herself – see The Floyd Archive), was suffering from jet-lag and instead of talking, she resorted to reading a written script where she described how she had found herself writing the Web anthology and the various ways she saw the internet and comics intersecting. What was striking – and this might have been due to the more theoretical approach Boxer took, was the description of the ‘future’ of comics in the Web. Quoting Scott McCloud, Boxer put forth the idea that the future of comics might lie in the ‘infinite canvas’ that is available on the web (she also quoted Gary Groth, whose attack on McCloud centers on McCloud’s “thinly veiled argument for animation”). Yet, the more she has explored the world of webcomics (including Hope and Shaenon’s work) she has found that webcomics tend to maintain the framing and page-constrictions found in print. As an insight she offered: webcomics are to comics what email is to regular mail. That is to say, there are more options available but we don’t utilize them to their full potential (or choose not to).

Here Hope and Shaenon focused on this issue: why don’t webcomics use the ‘infinite canvas.’ Simply put, they said, creating something on an ‘infinite canvas’ makes it impossible to publish. This, coming from two writer-artists that prefer print (mainly due to its financial possibility) doesn’t seem quite a shock. Hope did comment on her Sex Rainbow work being printed as a deck of cards in order to include the ‘infinite canvas’-like feel it had on the web, prompting Worcester to ask: “So is this the future of reading? A deck of cards?”

Ultimately the panel – in due part because both of its writer-artists were print-based, or functioned within a print-based comics environment – didn’t (or couldn’t) explore further the implications that Boxer’s comments and questions raised (sadly, no new ground was opened in terms of the ‘weightlessness,’ the ‘ephemeral nature,’ the ‘insubstantiality’ of webcomics or even the paradoxical idea that, in being less substantial, webcomics offer more possibilities for archiving than their print counterparts!). Instead the conversation veered towards a web vs print comparison where both Shaenon and Hope bemoaned the lack of Editors on the web, saying that the help of an editor in print-based projects helped them immensely.

And once the floor was open to questions, the panel became a How-To seminar. Up and coming webcomic artists wanted to know how to promote their work; established webcomic artists who Hope and Shaenon read professed their admiration; and ultimately the session became more of a networking panel, strengthening the sub-culture of webcomics rather than exploring theoretically what the internet can/should/does offer the form of comics. [Ed note: This kind of sounds like a complaint, but alas, as an English Grad Student, I feel everything should be more theoretical – which need not be taken as a complaint]