Persepolis, or How Graphic Novel is the New Memoir 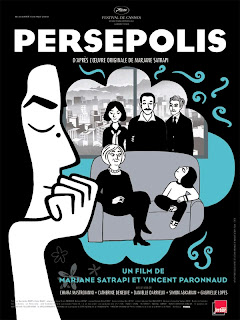 I’ve been hearing about Persepolis for months now. I can only blame my ‘responsibilities’ for why I only got around to watching it this week (also: who knew it was still playing? Gotta love NYC theaters!), but now that I did, I can safely say it was worth the wait: how refreshing is it to see an animated film dealing with ‘adult issues’? For all … 5 of you that read my blog regularly, you’ll know I’m a bit of an Animation junkie, but just as with everything else in life I find myself sometimes just watching the same animated-type movies (Disney musicals, Pixar coming of age stories, TV spinoffs, etc.) so this was definitely a welcome addition to my list of Animated Movies I enjoyed.

Based on Marjane Sartrapi’s graphic novel memoir about her life during (and after) the Iranian revolution (and war), Persepolis follows a black and white animated Marjane as she finds herself constantly constrained and limited by the ever-encroaching Islamic Fundamentalist State sanctioned beliefs. Whether she’s listening to the Bee Gees (and dissing ABBA as music for ‘losers’), attending a hard rock concert in Vienna, or smuggling Iron Maiden tapes, young Marjane is always yearning for a free world where she can be herself – where people she loves aren’t persecuted for their beliefs, where her mother isn’t harassed and her family isn’t living in constant fear of getting caught owning wine.

While there’s much political commentary to parse through in this film – more than I am competent enough to even begin to understand, the one thing I wanted to bring out is the amazing animation and its pristine use of black and white photography throughout the film. The film looks simple, yet never boring; monochromatic, yet never the same. In a world where CGI seems to be dominating the Animated industry (at least here in America – traditional animation seems to be alive and well in the Anime Market; expect a post on Tekonkinkreet soon), it is refreshing for the medium to be used in such a minimalist and sophisticated way. I enjoy the visuals in Pixar films, the cartoony look of The Simpsons, the meticulousness of Miyazaki films and even the Disney-look… but Persepolis is here to remind us that story comes first. A