Oscar Travesties, or How Grantland’s bracket is as fratty as it sounds

Have you checked this Oscar Travesties bracket happening over at Grantland? It bills itself as “A tournament to determine the worst Academy Award moment in modern history” which is a pretty nifty (if tired) premise, especially when they run the gamut from “On the wrong side of history” — Rocky beating an impressive line-up of now-classics — to “In-show shenanigans” — Jame’s Franco’s hosting. 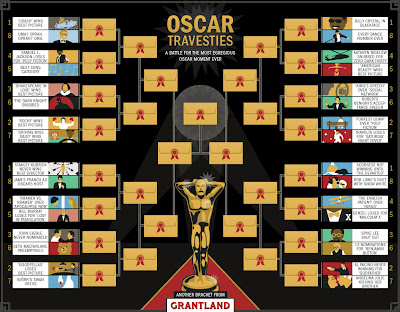 It was only when I started digging further into their “arbitrary” (their words, not mine) choices that I began to see what can only be labelled as a fanboy (if not merely “male”) sensibility running throughout. Take for example the fact that Kathryn Bigelow (for her Zero Dark Thirty), Angelina Jolie (for kissing her brother) and Björk (for her swan dress*) are the only women singled out. According to the bracket, Bill Murray, John Travolta, Denzel Washington, John Cazale, Spike Lee, Al Pacino & Samuel L. Jackson losses (or shut outs) all deserve space in this bracket while no actresses are singled out for similar scenarios. Couldn’t we argue that Lauren Bacall’s loss, Streisand’s “snub,” Cate Blanchett’s nom for Elizabeth II: Reigning Harder, or Zellweger’s win are all in line with the type of moments being spotlit by the bracket?

* Why put Björk but leave out something like Trey & Parker’s J-Lo/Paltrow stunt for example? is a question that seems rhetorical until you realize the former is actually an extension of the Swedish singer’s persona while the latter is a har-har fratty joke. To be fair, I don’t see how either would rank among “egregious” Oscar travesties, but the comparison seems apt to drive the point home.

That is to say nothing of the types of films that are implicitly (and uncritically) celebrated by the bracket. Does Pulp Fiction really need to hog two spots? Does Scorcese? Do we really need to specify “Kramer vs Kramer over Apocalypse Now” but not acknowledge that the travesty wasn’t Crash winning per se, but Crash winning over Brokeback Mountain? Are Shakespeare in Love and American Beauty such travesties? This is not to knock on the Coppola flick, or Marty’s losing streak, or to blindingly champion the Shakespeare rom-com or Mendes’ debut, but you gotta admit that the movies being favored skew not only to male-driven but also to those championed by college freshmen dorm walls everywhere.

Throw in the fact that “Best Song” and “Every dance number ever” are there and you start seeing a trend. The inclusion of the Rob Lowe/Snow White moment seems more than necessary, but to throw under the bus an entire category (which has given us plenty of iconic Oscar moments) while dismissing “dance numbers” seems sloppy and borderline offensive: would we want to live in a world where we’re deprived the tender performance of “Falling Slowly,” the showmanship of a Hugh Jackman opening number or the live-wire act that was Beyonce performing all the nominated songs? (On second thought, I’d probably have added that last one up on the bracket myself). If we really want to focus on the below-the-line categories, why not focus on the changing rules and regulations of the Best Original Song, Best Foreign Language Film, Best Score and Best Documentary categories? Or (this year’s Skyfall‘s) Roger Deakins, Greg P. Russell, and Thomas Newman’s losing streaks? And if we want to throw stones at a staple of the televised ceremony, do we really think “every dance number ever” trumps in terms of egregiousness the sometimes great/oftentimes boring tribute montages? It somehow seems easier to target singing and dancing. No need to spell why of course as it is such a hobby horse as of late — I’m surprised Chicago didn’t make the list!

Maybe I’m being overdramatic, but at the end of the day, all this shows us is something we sadly know very well: women and actresses continue to be sidelined, while fanboy fantasies continue to be nurtured. And really, isn’t that the most egregious (Oscar) travesty of them all?