Django Unchained, or How Inglorious 2.0 (Slavery Edition) is a bloody mess 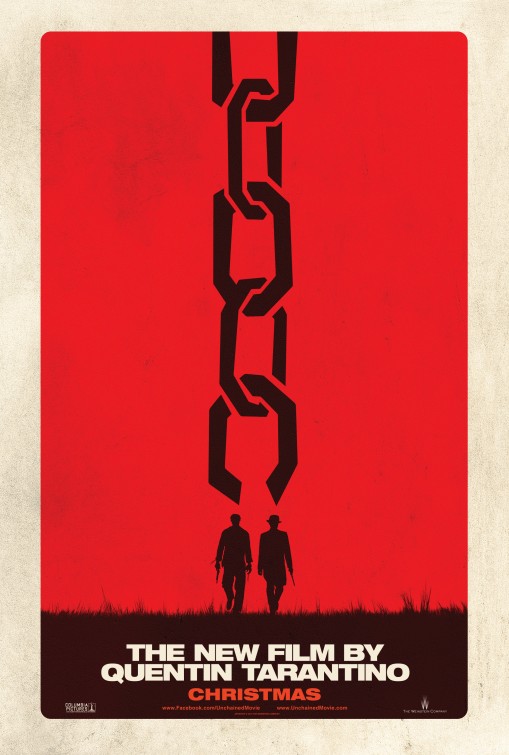 What to say of Quentin Tarantino’s latest revenge fantasy set in the years before the Civil War and centered around ex-slave Django (Foxx)’s quest to rescue his beloved Bromhilda (Washington) with the help of a German bounty hunter (Waltz)? I’ll say this, Tarantino knows how to score the hell out of a movie: Morricone’s Ancora Qui is particularly haunting, quietly scoring the calm before the blood-splattered climax at Candieland. He also knows how to get visceral performances from his actors. This serves DiCaprio and Waltz quite well; the former relishes playing a dandy villainous role while the latter tweaks his charismatic yet ruthless take on Hans Landa to good effect. But the movie, both in its exploration of race relations through the prism of a spaghetti western and its success at offering actors a playful arena in which to let loose, wholly belongs to Samuel L. Jackson’s cruel, and hammy Stephen. As Candie (DiCaprio)’s right hand man at his plantation, Jackson’s Stephen is the epitome of what Tarantino’s unwieldy movie seems to want to accomplish: to look deeply into the shameful past of slavery.  Stephen is the most despicable character in the film, not least because he is a character who perpetuates (and relishes) the very enslavement that keeps him tied to Candie.
That Tarantino, in usual Tarantino-fashion, frames his film as a revenge fantasy following a cipher of a man who hopes to be reunited with his mostly-mute wife (Washington is given barely a personality let alone any dialogue) amidst a mostly entertaining shoot-em-up western is what makes it interesting in theory yet lacking in execution. Tarantino has several scenes that shine (Candie’s phrenology-inspired outburst, Schultz’s introduction) but overall the film feels not only too long but too often dragging. While the violence is at once more stylized yet less glamorized than in his past films, packing a punch especially because of the real-life violence they evoke (I’m thinking here of the dogs scene and the mandingo fight), it nevertheless reduces Django’s quest less to the larger context of slavery than to the American individualized myth: Django and Bromhilda get their happy ending, even as the structure of slavery remains intact. In this sense, while the flair and subject matter of the film should harken back to Tarantino’s own Inglorious Basterds, it is telling that while that 2009 film ended with the (albeit imagined) murder of the Fuhrer and his most trusted advisors, thus annihilating Nazi ideology both figuratively and literally, Django barely attempts to address the larger structural institution that enslaved the very characters that populate Tarantino’s latest. C+