"On the internet, everyone thinks I’m a dog", or How it’s a Roxie’s World After All 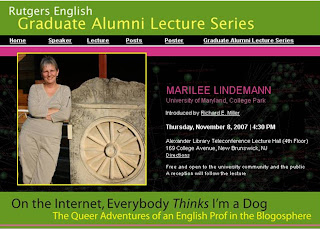 Blogging about an academic lecture (even one on blogging) seems like an attack on everything I get taught in grad school, but I do feel that the more interesting part of a talk like this is the experience of it, which is what I wish to re-produce here (consider it [retroactive] liveblogging in an academic setting).
What do you get when you take the opinionated tone of a political blog, the style, wit and flare of a queer blog, the subject matter of dog blogs and the vocabulary and conceptual thinking of an academic blog? I don’t really know, but Roxie’s World comes close to exploring what such a mixed-breed blog would look like.
More than just a case study on Roxie’s blog, Marilee’s talk worked to explore bigger ideas surrounding the greater blogosphere: What is our audience? How do statcounters dictate how and what we write? What is the process of reading a blog? It was a wonderfully choreographed self-reflection that led me to think about what it is that I (try and) do here at A Blog Next Door.

The lecture itself was divided in three separate parts, each exploring one of the subdivisions of the corporate-like structure of Roxie’s World. I won’t rehearse Marilee’s lecture point by point (mainly because without her wit and without her Keynote Presentation – featuring flame effects and a great Notes on a Scandal shout-out, I don’t think I’d be doing it justice). What I thought I’d do instead was to toy around with some of the ideas Marilee threw out there and explore them [INSERT MORE HERE]

I. Office of Persona Management 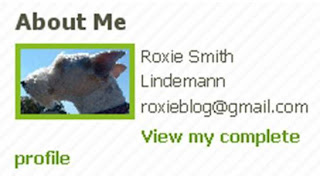 The ironist is ironical. Not because he does not care, but because he cares too much
Randolph Bourne “The Life of Irony” (1913)
Much of Marilee’s talk worked to think about what blogging does, especially when one’s own tone and subject matter seem to defy the kind of writing one does elsewhere – how does one write like a dog? With Irony, Marilee suggested (at least that’s how one writers as Roxie); and she explained, irony (with Jon Stewart as its Elizabeth I) in a post-9/11 world seems to be a great tool with which to comment on the world we find ourselves in. Yet, to write as someone else, and in this case as dog offers a distinct possibility, calling into question the over-used “S” word (subjectivity): Marilee suggested that every ‘blogger’ works within a persona and this can be fluid enough to suggest a shift in subjectivity not just from blog to blog but from post to post, making every blog author a pseudonym for a ‘virtual’ subjectivity – transient and ephemeral as the posts themselves.
II. The Department of Clicks and Eye-balls: on audiences, real and imagined

Here is adhesiveness, it is not previously fashion’d, it is apropos;
Do you know what it is as you pass to be loved by strangers?
Do you know the talk of those turning eye-balls?
Walt Whitman “Song of Open Road”

This was probably my favourite part of the lecture, if only because it spoke very clearly to things that, as a new blogger, I find myself wrestling with. From the hypothetical (and hilarious) example of ‘What if Shakespeare had had a StatCounter?’ Marilee went on to talk about the ways blogging is a Reader Respone Theory 2.0 in the sense that it is constant and direct conversation with its readers, who, thanks to software like StatCounter monitors readership – from keywords, referring websites and the ever panic-inducing unique visitor graphs. So, what IF Shakespeare had had a StatCounter? Marilee suggested he would have written less plays, spending more time monitoring his audience’s tastes rather than writing new material for them, but the question stands: what is our relationship with our readers and how closely should a blogger ‘adapt’ and ‘write’ for the endless longing for more (albeit ADHD afflicted) web-blog readers?
The other reason I really enjoyed this section was the invocation of the ‘sorrow of bloggers’ that comes about with the tacit rule of ‘newer is better’ that underruns the blogosphere. Marilee talked about the sadness she feels every time a new post displaces the earlier one and pushes it downward and I think I know exactly what she means – especially because it is so hard to trust readers to find those posts once they’re exiled to the Archives…

III. Department of Eye Candy and Other Intertextualities: Visual and Other Pleasures in Roxie’s World

Finally it hit her: the work embedded the verbal narrative in a topographical environment in which word was interwoven with world. The world contained the words but much else besides, including layered images, complex navigation functionalities, and simulated documents. By focusing on the words alone, she had missed the point.
Katherine Hayles “Writing Machines”

The final part of the talk focuses on spotlighting the issue of images in the blogosphere. I particularly enjoyed the qualification of ‘visual quotation’ which, I agree, sounds much better than ‘theft’ and the interesting discussion that followed on trying to understand what this new batch of ‘Digital Humanists’ can and do do with this new form of textuality – more interactive, visual and multilayered than the books, magazines and journals we’re used to. The conversation, it seems, is still open for more opinions – there’s still work to be done!

[Favourite concept: MLA going all CSI on Shakespeare’s hypothetical hard drive. I can see the CBS-MLA co-production now, coming soon to a made-for-tv spot near you…

Closing remark: “Have a baby if you must, write a book if one is required for tenure, but if you just want to put stuff out there, dear, just get a blog!” – A perfect ending to what was an amusing and insightful talk – see you at Roxie’s World Moose!]