Michael Clayton, or How I finally caught up with George 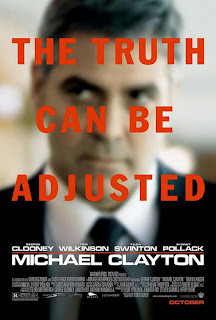 Michael Clayton
Written and Directed by Tony Gilroy
Starring: George Clooney, Tom Wilkinson, Sydney Pollack and Tilda Swinton
[Did anyone else notice the list of Exec Producers (read: powerhouse names!) on this thing? George Clooney, Steven Soderbergh, Anthony Minghella & Tony Gilroy]A “character study.” A “great genre film.” A “legal thriller.” These are just a couple of ways this Academy Award nominated film has been described – and with three electric performances, Tony Gilroy’s film deserves all those trite and overused expressions. Not as memorable or as beautifully shot (or in the case of that one, as witty and lovable) as the other four Best Picture nominees, this George Clooney vehicle works because of its tightly written script and its deft direction – both thanks to Mr Gilroy himself.
Instead of rehearsing the plot (because really, Mr Gilroy maps it so skillfully I don’t think I got all the details in that first viewing) I thought I would just share my favourite scene in the film, which made me fall in love with that Burberry-scarf wearing desperate wreck that is Karen (hereafter referred to as “Academy Award Winner Tilda Swinton” – because really, in my head, she wasn’t acting, just exploiting that great talent that just bristles with under that unexplicably pale skin and piercing green eyes.

The Scene:
Tilda is giving a private press conference. Intercut with her “casually laid down” answers are shots of her getting ready for the conference, rehearsing her answers while she chooses what to wear, gets dressed, washes her face, etc.
What is so great about this scene is that it nails down Karen’s character while also displaying an attention to character and deception – two themes that the entire movie centers around. The tag line “The Truth Can Be Adjusted” is incredibly apt and does more than just obstruct George’s salt-and-peppered look in the blurry poster