Mad (Wo)Men, or How it IS the best show on TV right now

If there is one thing we can say about Mad Men into its second season, it’s that it has upped the ante for the female characters. Relegated to a (very frilly and glamourous) corner last season, female characters from Matthew Weiner’s award-winning show have proved to be as psychologically complex and alluring as Mr Don Draper himself. A look at the core three: 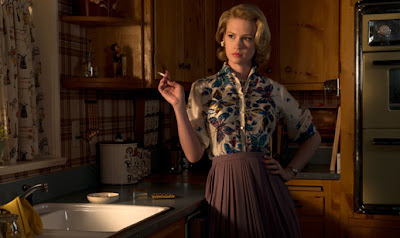 Betty has evolved from being a cliche and become truly an exploration of domestic ennui, where it’s not just about sexual frustration, or spousal distance, but about what she wants and wants to be. For all I know, this role was pretty much based and developed alongside Julianne Moore’s greatest roles in The Hours and Far From Heaven – I mean, you can see her sadness and longing when she looks at Don even though she craves and is fascinated by the touch and gaze of other men around her. If you need another reference: she’s Mary Louise Parker sans the valium

Favorite quote:
(Answering why she looks sad)
“No, it’s just – my people are Nordic”
Crucial Scene Season 1:
A day-dream sequence with an A/C salesman
Crucial Scene Season 2:
Car failure in the middle of the road forces Betty to seduce the repair guy and still make it clear that she won’t go that far. 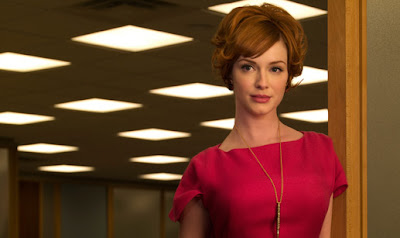 One ofmy all time favourite characters on the show – mainly because she seems to get the best on-liners and zingers while all the while looking like a gorgeous voluptuous woman (doesn’t she look like she could break Teri Hatcher in half just by looking at her?). Just like Betty, Joan has moved on from being a stereotype and become a much more interesting character: what happens when what defines you gets neutered as soon as you get what you want? (the former being a fun sassy guy-crazy gal, the latter being a big rock and a marriageable guy) 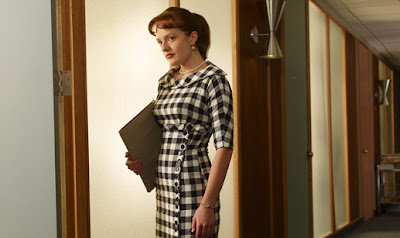 Peggy started the series as the focal point through which we saw Sterling&Cooper, but ever since Season 1’s finale (and this season in particular) she has become Don’s female foil: both are hiding secret pasts and trying to get them buried so as to not endanger their current positions. What is interesting is the extra layer this gets when you throw such a revered concept as ‘motherhood’ into the mix. Don may have put his family and identity past him, but is this more of less forgivable thanleaving a child behind?Needless to say, I’m interested to see what the writers have cooked up for Peggy now that she’s taking Joan and Bobbie’s advice and “acting like a woman”
Favourite Quote:
(Rejecting a fellow at a party)
“Eugene, I’m in the persuasion business, and frankly I’m disappointed by your presentation”
Crucial Scene Season 1:
Dances with a boy at a party, sees Pete looking down on her. Stops.
Crucial Scene Season 2:
Dresses up, sits on a guy’s lap, sees Pete looking down on her. Laughs.

Bring on the rest of the season to see what’s in store for these Mad (Wo)Men!