LGBetty, or How Queer is MODE? Pt 1 Marc St James

I love Ugly Betty. I really do. I love the eye-candy (Christopher Gorham, Eric Mabius, Michael Urie), I love the way it maintains a good balance between the soap operas it was inspired by and comedy, I also love the way it looks (vibrant colours, SaTC-like fashion-forward costuming)… needless to say I think it is one of the best comedies out there right now.
It is also one of the (albeit few) shows that continuously portrays queer characters (Brothers and Sisters comes to mind – and this Sunday Desperate Housewives joins the ranks – are we noticing that these are all ABC shows? I guess Disney knows where it’s at!). And while it is always refreshing to see the queer community portrayed in primetime tv what with Will and Grace and QAF gone, the L Word confined to Cable and Ellen stuck in a sterilised de-queered position in daytime tv.
But, how queer-forward is Ugly Betty? 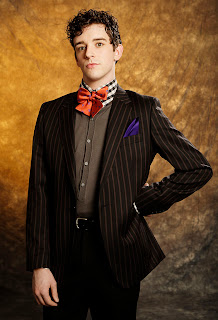 Played wonderfully by the talented Michael Urie, Marc St James is the kind of gay the LGBT Community loves and also loves to hate seeing on primetime. We love him because he is the stereotypical gay – which regardless how much PR the LGBT community tries to mobilise it will never get rid of: Marc is white, middle/upper middle class, shallow, fashionable, flamboyant and, just as Will in Will & Grace he is oddly asexual and surprisingly subservient to heterosexual characters (Wilhelmina and Amanda). I would even venture to say that it is because Marc fulfills this stereotypical (cultural) space that the LGBT community would find him problematic. Yes, we’ve come a long way since gay characters were muted, unsexed and invisible in mainstream American popular culture (see, for example my post on Suddenly Last Summer) but is Marc the kind of character we want to be seeing ourselves reflected as? Probably not, he is, after all a stock character by now – see Stanley Tucci in Devil Wears Prada, Jack in Will & Grace, Homer’s roommate in that one episode, Lloyd in Entourage, etc…
Marc offers us in Ugly Betty a character that once gives us a visible LGBT community and at the same time problematizes the ways mainstream America commodifies and packages gay characters so that they are likable (everything from “Hey! We’re normal! We’re assistants just like you!” to “See how Marc helps Amanda, you can have your very own ‘helping gay’ too!”).

So what else is Ugly Betty doing for the LGBT community?
Check the blog next week for parts 2 and 3.