Les Chansons d’Amour, or Top 5 Academic Essays I could write on that film 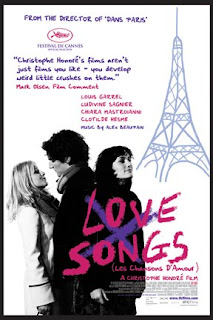 Last weekend I had the pleasure to watch Christian Honoré’s French musical Les Chansons d’Amour (or Love Songs for those us of who don’t quite master le Français). B+
The Premise: a (‘straight’) couple finds itself having trouble accommodating the third party (a girl (Clotilde Hesme) who works with the boy (the beautiful Louis Garrel) they have invited into their bed (and life); how else would they deal with this? By singing French pop-y songs. Things turn worse when… (and this was quite the shocker) Ms Ludivine Sagnier (who I can only remember fondly from that other French musical I love, Ozon’s 8 Femmes) dies and leaves the other two thirds of the relationship looking for a way to cope with their loss. Enter the cute high school student played by Gregoire Leprince-Ringuet, who woos himself into Garrel’s character’s life.
And while this musical doesn’t have the urban feeling of Once, nor the endearing quality of the aforementioned 8 Femmes (and it is far from being a Broadway-like musical), the songs do their job at portraying the hidden (and not-so hidden) feelings of their singers. Uneven at times, and having a much better third act than I would have imagined, Love Songs gave me ideas for 5 Different Academic Essays I could write:
1. The portrayal of non-heteronormative relationships requires an atypical cinematic genre (read: the ‘urban, realistic [French] musical’). Discuss. Why use songs to explore non-traditional (albeit more ‘European’ it seems) forms of romantic and sexual relationships in the film?
2. The film is interested in different forms of intimacy. Explore. Think of the ways filial, familial and even working relationships are used to contrast the center romantic couplings.
3. Grief is the guiding principle of the narrative. Elaborate. Why does the film begin with ‘death’ and what does it add to the retroactive understanding of the couple’s dysfunctionality?
4. Sexuality and romance are the two axis upon which every relationship in the film gets enacted. Examine. Does the film advance a sexual ideal of ‘love? A romantic idea of sex? Are the two intextricably intertwined? (See ‘As-tu déjà aimé?’ in particular)
5. Homo>Hetero. Lyrics and scene-stealing wise. Why?