Lars and the Real Girl, or How Social Inadequacy Meets Ryan Gosling 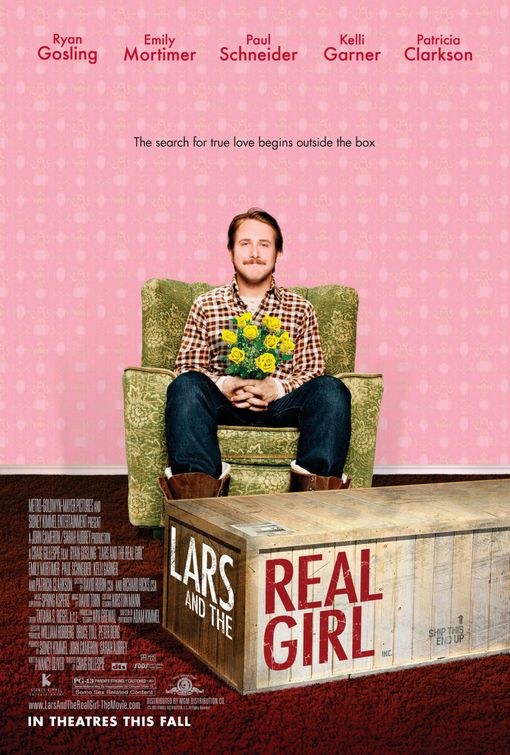 At last – a movie about a socially stunted young man who has a blowup doll for a girlfriend.
Okay, so maybe no one out there was really waiting for this movie, but hell if it isn’t a damn good feel-good, feel-depressed indie dramedy with a nuanced performance by the flawless Ryan Gosling (one reads about his perfectionism and after seeing his work over the last two years, one is not that surprised – he’s an actor-y actor, and I kinda like it).
The set-up: a young man living in the garage of his family home (his brother and sister-in-law live in the main house) starts breaking out of his isolated social life when he meets someone online and they come to visit. Enter Bianca: the blowup doll. Following Patricia Clarkson’s advice his family and the entire town humour him and even begin creating a life for Bianca that at times rubs Lars the wrong way. What could easily have been a Will Ferrel or Adam Sandler one-note sketch vehicle movie is here turned into an exploration of the inability of one person to connect with the world around him.
In one scene Lars reads Don Quixote to Bianca, and in a sense Lars is a Quixote-like figure – not just a solitary and fantastically-minded ‘knight’ but also a slightly delusional character who relates to fantasies of a foreign missionary girlfriend, and of choking teddy bears better than to his earnest and concerned family members. Gosling plays Lars as if he was a delicate crystal which, if touched will crumble into little pieces (he flinches, shies away and recoils from people’s hugs saying they ‘burn him,’) and it takes a talented actor to pull off what are essentially one-man scenes; also Gosling is keenly aware of the thin line that Lars straddles – he could have been played for comedy all the way throughout and could have been played for pity but Gosling manages to hit either and both those notes whenever the writing requires it.
The strength of the movie (which plays like any and most indie dramedies) is, not only Gosling’s performance but Nancy Oliver’s script. Coming from Six Feet Under the black humour is not surprising – what does come off as a surprise is the ways in which the script balances its warmth, its darker undertones and still manages to spark uproarious (albeit sometimes awkward) laughter from its audience. Indeed, it is the naturalist tone of the piece – working with an absurdist premise – that makes you want to hug Lars even though the movie has also argued he might be more broken, more delusional and more socially inept than anyone you’ve ever encountered.