Just-in Between, or How Queer is MODE? Pt 3 Justin Suarez

How appropriate that I am posting this last installment of the ever-so-interesting ‘How queer is MODE?’ the day after Ugly Betty gave us one of the ‘gayest’ episodes yet (Wicked, gay drama, playbills, ‘bitchslap,’ hairdressing…)

In our previous discussions of queer characters in MODE we’ve seen that Ugly Betty seems to straddle that very fine line between comedic stereotypes and progressive LGBT exposure – Marc is the all-time flamboyant gay (and as a friend pointed out he is the kind of assistant Wilhemina and a company like Mode would have) who we’ve recently seen having a ‘heart’ for the Hitchcock (no pun intended) loving Cliff; and Alex/is is the confident MTF whose actions seem to blur even more any academic distinctions we make between sex and gender. In between these two we find Mr Justin Suarez. 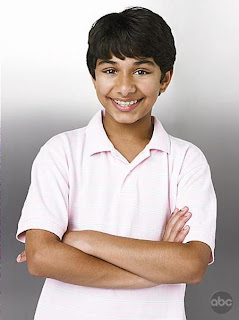 In preparing this post I tried to think about any other teenage characters in prime time tv that dealt so nonchalantly with the (albeit possibility) of being gay. Sure, the WB gave us the gorgeous Kerr Smith in Dawson’s Creek but the gay storyline was front and center and can now be used as a Sex-Ed didactic example of ‘how to deal with homosexuality in high school.’ Joss Whedon [again in the WB], continuing his ubiquity in my posts gave us in Buffy the Vampire Slayer‘s Willow a character that seemingly fell into her sexuality. I’m sure there are more but those seem to be the ones I recall the most and epitomise both ends of a spectrum when it come to presenting LGBTeenagers on TV. I think the beauty of Justin is the fact that his sexuality (while coded as obvious in a stereotypical fashion (he loves musicals, dresses well, reads Mode, hates sports)) goes by undetected and does not warrant an episode where the characters ‘deal with it.’ From day one, he was who he was – the closest we got to didactics was the Hairspray/Subway episode with Santos stressing the fact that he shouldn’t be liking stuff like that (though at the end he ‘understands’ and supports his son regardless). But even in that episode, while one can read that Justin’s sexuality is being muted and (re)presented in his masculinity as linked to his sexual taste, one could also see this as a moment where Ugly Betty wants us to think about and really question those (mis)understandings.
I hate to use the “R” word, but Justin is a good ‘role model’ for kids who feel that normative sexuality might not be the best fit for them, and that is refreshing to watch on primetime TV. I was a bit taken aback by the initial storyline that the writers set up for Justin starting Season 2 (his whole ‘dealing with Santos’s death’) but in a way, it strengthened and stretched the character in ways I would have never thought possible – how sad was it to see Justin try and imitate his father’s masculinity in his clothing and attitude to make him proud, only to find out that just being himself was enough? Heartbreaking. Sappy, didactic and saccharine, but heartbreaking nonetheless. Gladly, he was back to his Broadway Playbill trading self in no time.

So how queer is MODE?
Hard to answer – if we were doing a comparative study, the answer of course would be queerer than any other show I can think of (there are those that will point me in the direction of reality shows like America’s Next Top Model and Project Runway, but I am more interested in representation and not ‘reality’ – if only because I value and treasure writers and storylines). But since we’re not doing that, we’ll have to end in one of those awkward and unhelpful ambivalent situations: quite queer, but it could be queerer; or ‘queer enough’ for primetime tv (but what does that mean anyways, right?)