Important Artifacts, or How BUY THIS NOW! 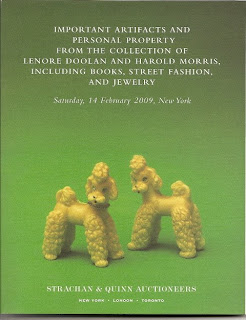 Important Artifacts and Personal Property from the Collection of Lenore Doolan and Harold Morris, including books, street fashion, and jewelry is, to put it lightly one of the best books I’ve read in a long time. Sure, sue me because the only reason I looked it up was because Ms Portman and Mr Pitt have recently signed on to star in the silver screen version/adaptation of this romantic tale, but mark my words: Leanne Shapton’s ‘auction catalogue’ is a wonder of a book.
The book “tells” the story of Doolan and Harris through the items that mark their relationship (letters back and forth, email printouts, clothing, gifts, etc.) and it is an achievement for Shapton to be able to create such full-fledged characters from mere objects. Forgive me while I put on my ‘graduate student hat’ for a second and quote Elaine Freedgood from her book The Ideas in Things:

The writer must “translate” the world rather than copy it. “The aim of Art, in depicting any natural object, is to produce in the mind analogous emotions to those produced by the object itself; but as with all our skill and care we cannot imitate it exactly, the aim is not attained by transcribing, but by translating it into the language of Art.” [George Eliot, Letters to Ruskin] The writer doesn’t “transcribe” the things of the world, but gives us instead some “translation” of them that will produce in us emotions that would be similar to those produced by the real stuff were it present: a subjective correlative, as it were. (118) 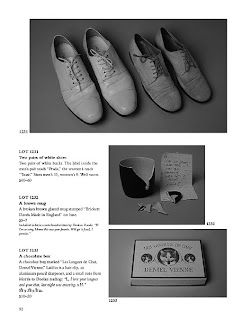 Shapton takes these ideas and literalizes. The romance (and break up) of Doolan and Harris as told by their objects is incredibly touching and real: here, playbills and slippers and dresses speak up and become both center of and the vehicle for this story. Shapton’s is a testament to the vicissitudes of materiality, a nostalgic look at how the objects that fill out our lives tell our story (that in 2009 we can still tell this story says as much more about the ‘virtual revolution’ than the endless Facebook and twitter updates flooding the net) and a heartbreaking romance that, though elusive and fragmented still hits home even though it ends as abruptly as it begins: with the turn of a page.