I’m So Excited, or How is it Pedro’s worst?

That said, I was left wondering; was I’m So Excited (whose infinitely superior Spanish title Los Amantes Pasajeros at least aims for subtlety and subtext, even if the film disposes of both in favor of ham-fisted social commentary) really Almodóvar’s worst film? While his highs (his Oscar nominated early screwball crossover hit, his Oscar-winning meditation on motherhood and performance & his Oscar-winning lyric film on muted love stories) are nearly universally praised, there’s rarely any talk of his lows. I guess it’s in bad taste, no? But I wanted to stack this newest flick to the other five that have always occupied that lower end of that master list of Pedro’s films I keep. These are, obviously, my own personal takes on these films and really, a subpar Pedro film is better, more interesting, thought-provoking and worth watching than most other films I watch every year.

[Disclaimer: I’ve seen all films but Dark Habits, so my rankings have always reflected that blind spot]. 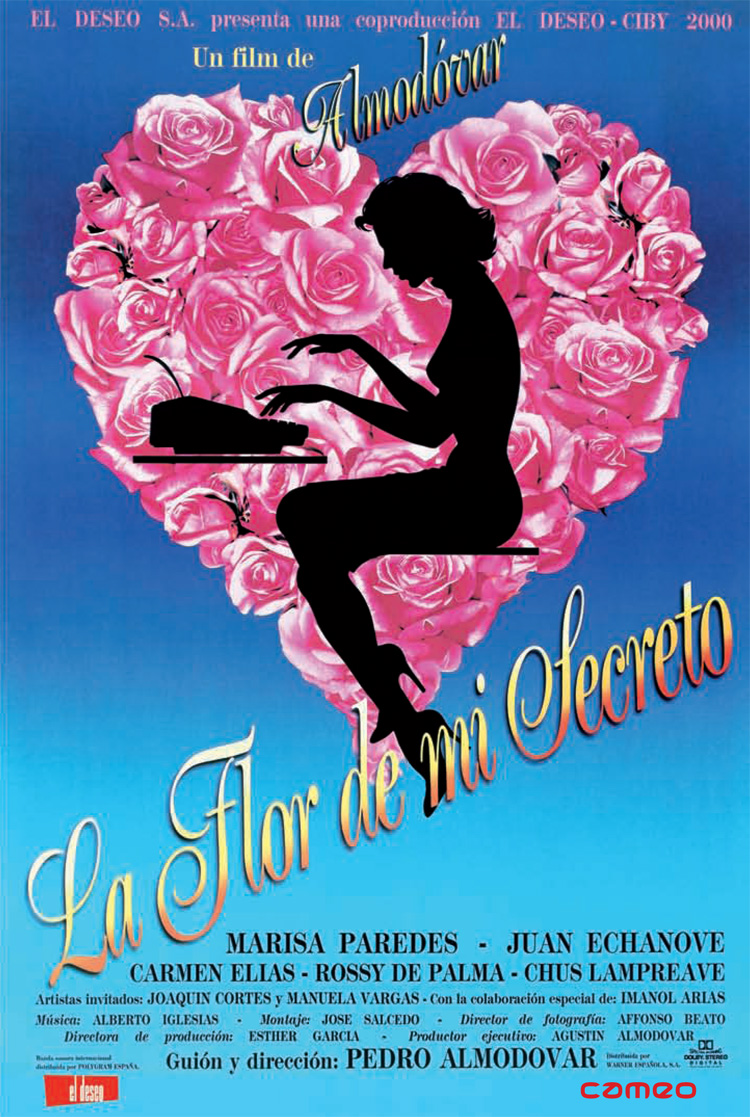 Flower of my Secret. The film that arguably began Pedro’s greatest streak of critical and commercial hits is, in hindsight (which is the only I have given that I arrived at it after seeing his later films) more of a rough draft of the themes and imagery that would haunt his most accomplished work. Not only does Leo pen a short story titled “The Freezer” that sketches out the later Cruz vehicle Volver, but an early scene of organ donation (here played mostly for laughs) becomes the core concept behind All About My Mother; add in the fact that it features a lovely dance sequence (heralding the iconic set piece in Talk to Her), and that the story of the film itself is about an author finding himself unable to continue writing the same things as before, and Flower of my Secret emerges as a turning point in Almodóvar’s filmography that doesn’t quite gel all the disparate story lines and characters it so lovingly delineates. If it weren’t for Paredes, the film would crumble under its own weight, it’s never quite the sum of its parts. 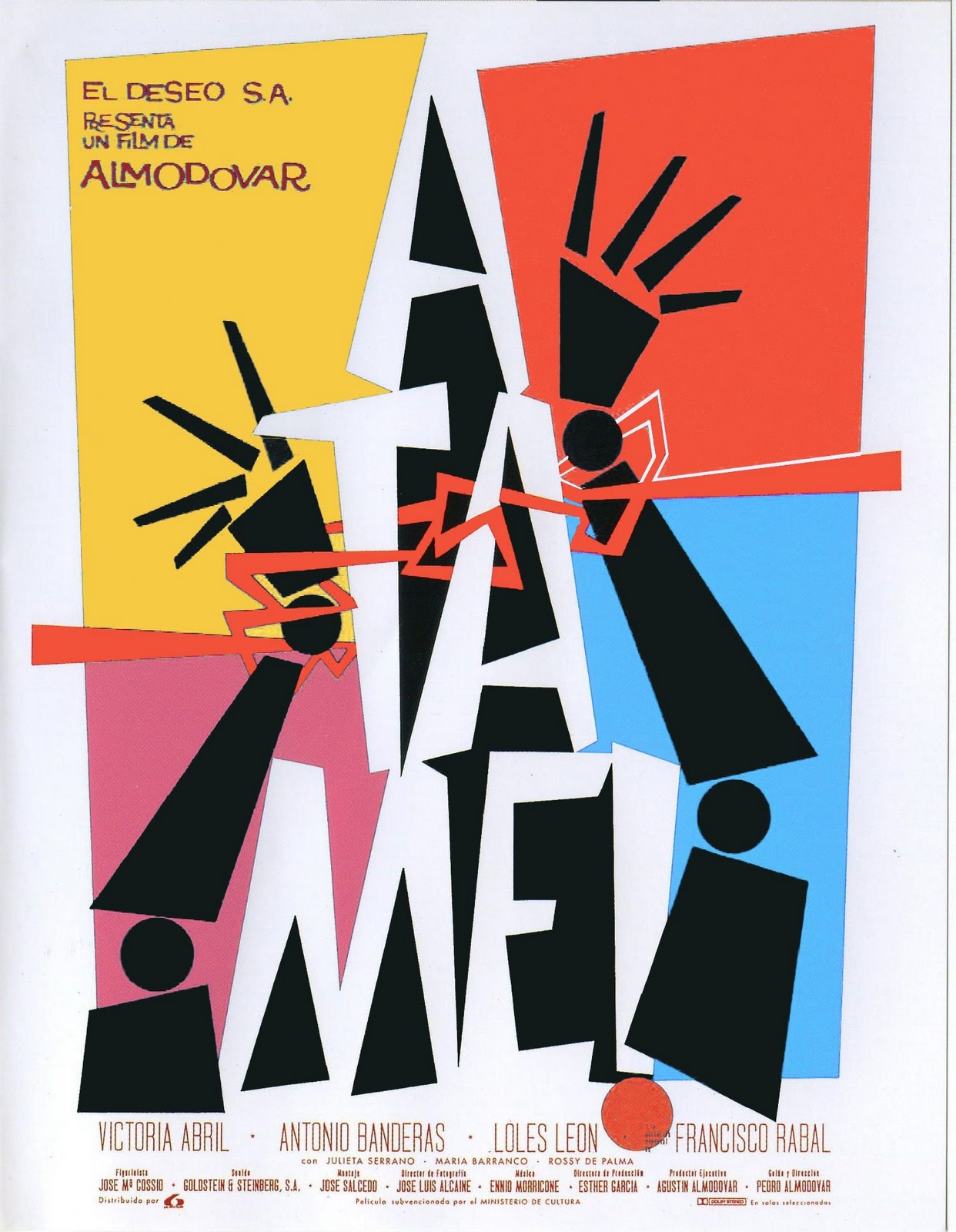 Tie Me Up! Tie Me Down! Better known for the iconic MPAA fight over its rating than for the actual film said regulating force seems to never have laid eyes on, this film arguably stands on the very trim shoulders of its leading man, a youthful Antonio Banderas. And yet, beyond the fascinating premise of a woman tied up falling in love with her stalker/kidnapper, the film is little else, especially when the final third of the film so sunnily dismisses the curiously ambiguous psycho-sexual territory that the premise sets up. Banderas, much like Paredes in the above example, elevates the film, giving us insight into the troubled world of Ricky who spends most of the film on the verge of a nervous breakdown of his own. Sadly, and this goes for the film that occupies the bottom of this list as well, I wish his co-star were up to his standard. Actually, in reviewing all of his films again for this, I was struck by how many of Pedro’s good films stand on their star’s performance, while his lesser films crumble under bad casting (that said, for every Law of Desire that overcomes a seemingly lost Eusebio Poncela, there’s a Kika which can’t compensate for its dubbed American male star). 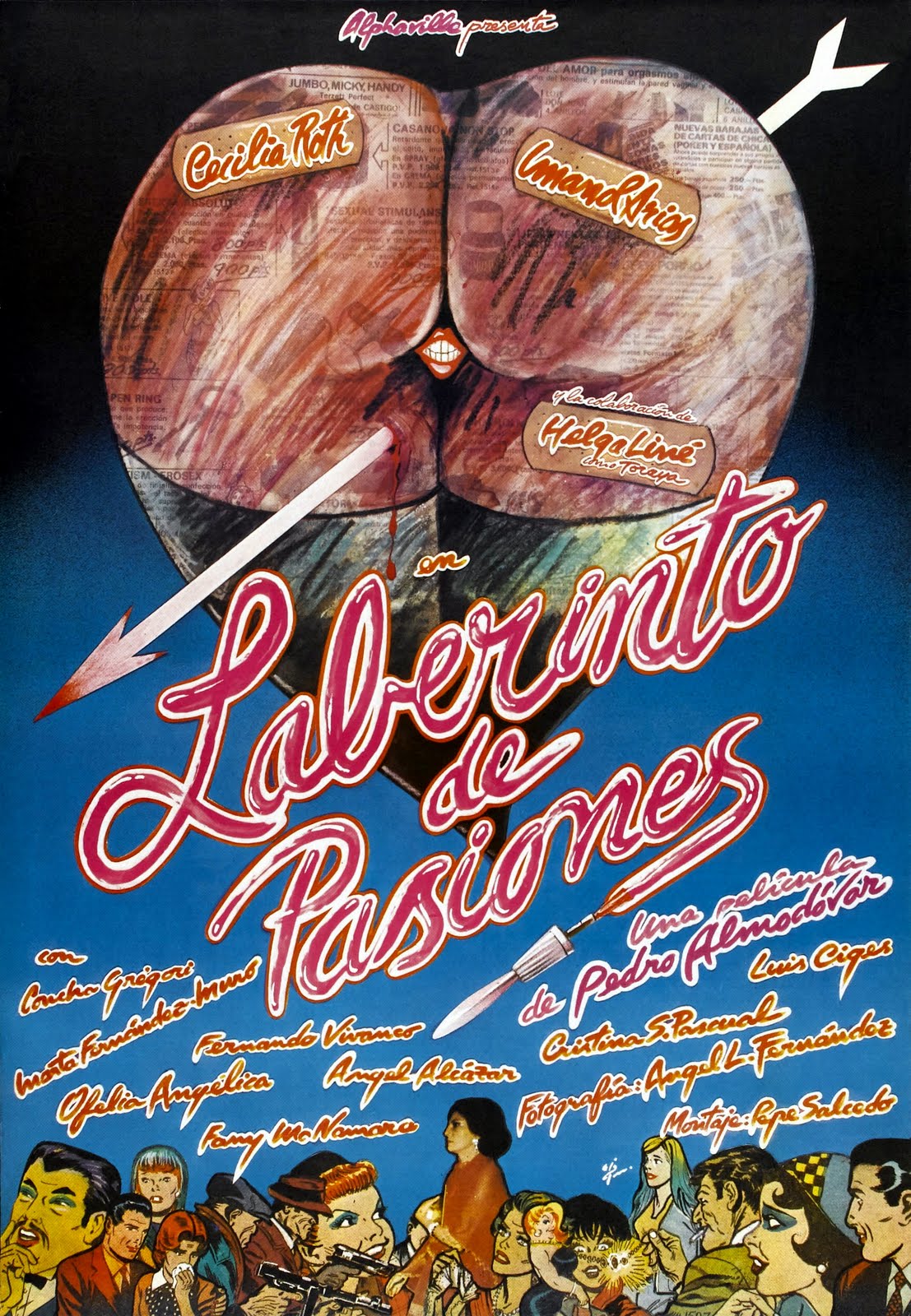 Labyrinth of Passion. Much like his first film Pepi Luci & Bom (which I’ve never much cared for but which at least bristles with Pedro’s early sexual and comic energy — there’s a General Erection contest!), Pedro’s second feature is one of those few Almodóvar films where the different plot strands seem to be at odds with one another, rather than seamlessly being brought together. There’s a terrorist plot, a light-averse nymphomaniac, a woman attempting to get impregnated by her step-son. It’s an entertaining flick that established what kind of films Pedro would be creating in the decades to follow, but much like Flower of my Secret it’s become an early rough draft for later works. It struck me as I watched I’m So Excited that this was a companion piece to Labyrinth (not just because Roth and an airplane are common denominators); though in both I’d wager that Pedro lost his way in his labyrinthian sexcapades. 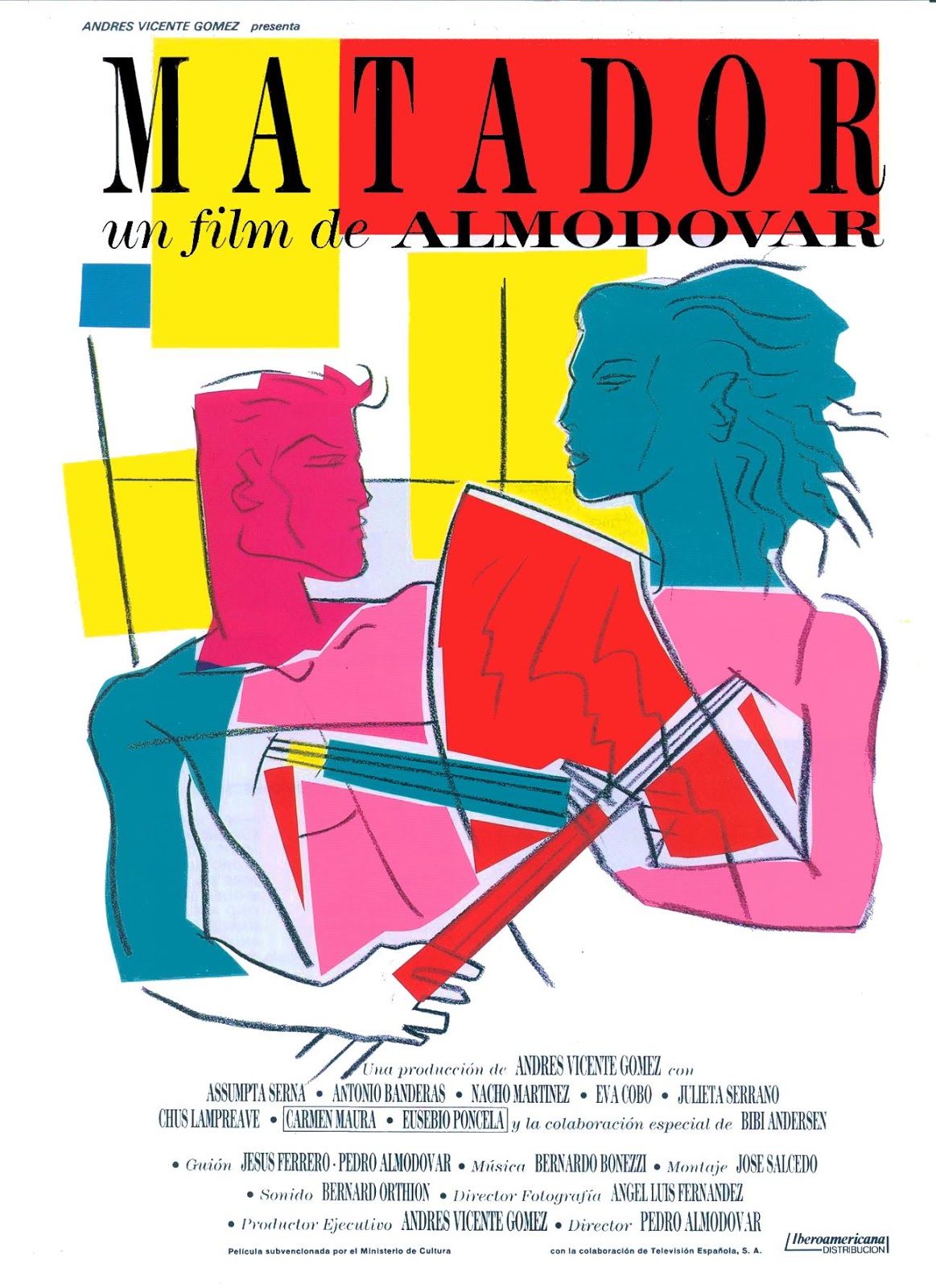 Matador. Almodóvar himself claims this to be one of his least favorite films and I have to agree. It is just too symbolic and stylized for my taste. It’s a great film to think about in terms of what it says about gender normativity, surrealism and the conflation of sex and death; I’m sure countless articles have been written about its psychoanalytic roots and surrealist debt, but every time I watch it I’m left cold despite its heated subject matter. There’s so much red symbolism I can take before I start scrambling for the door (though not before fast forwarding to the stylized eclipse murder suicide sex scene that closes it). And much like in Tie Me Up! Tie Me Down! Banderas commands the scene playing yet another troubled young man which he’d later perfect in Almodóvar’s next film, The Law of Desire. 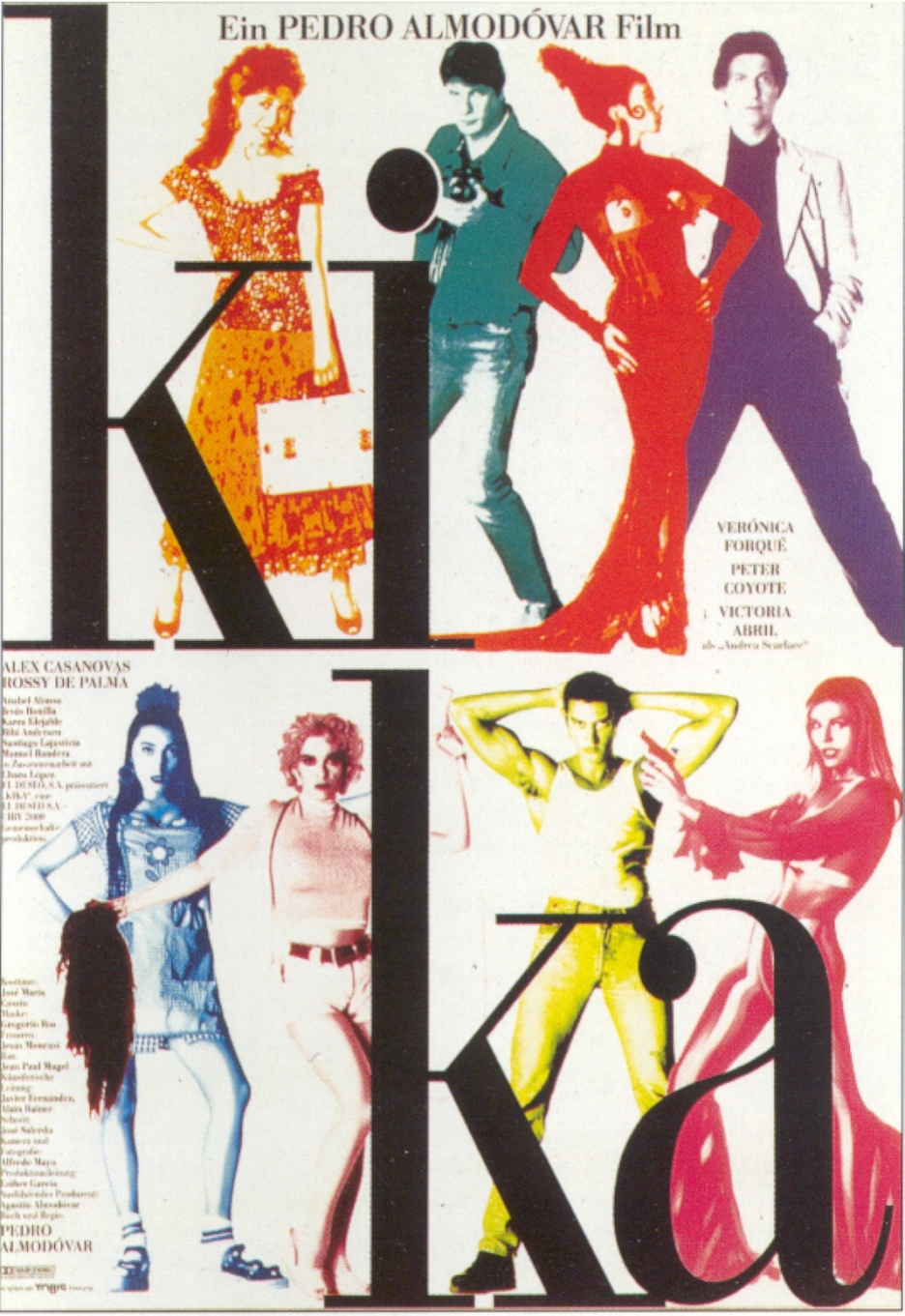 What has long inhabited the last slot on any Almodóvar film list I compile is Kika. And I think it is casting which hinders my appreciation of it. The women who have made great collaborations with Almodóvar have one thing in common: Carmen Maura, Marisa Paredes, Cecilia Roth and Penelope Cruz all understand the tightrope act between melodrama and comedy, between pathos and humor that Pedro requires. I always found Victoria Abril, here playing “Andrea Caracortada” — the force behind a morbid tabloid show, dressed in outrageous Versace designs — a bit too mannered; too sexy to be vulnerable, too knowing to be naive, while Veronica Forqué, who plays the flighty title character, too broad a comedian to pull off the more complex scenes that would have grounded this otherwise spacey flick. Much like the rest of the entries on here, Kika is a film ripe with half-baked ideas and concepts that don’t quite come together in what we see onscreen, but which laid the scene for later polished versions of itself: the carnivalesque rape in The Skin I Live In, the use of television to expose crimes in The Flower of my Secret, and the use of written documents to reveal murderous intents in Bad Education all have their seeds in this transitional film.

What we can hope is that, much like these examples show, I’m So Excited finds its half-baked ideas (on Spanish economic inequality, unabashed and sexualized homosexuality, sexual & corporate surveillance, among others) soon reworked into more deserving set-pieces in Pedro’s future films. If nothing else, Pedro’s filmography shows us that past failures and disappointments can serve well as launching boards for future masterpieces; let’s hope he has some of those still in his backpocket.

My full ranking of Pedro’s films: