Hit Me With Your Best Shot, or How trust Nat & Belle to wake me from my slumber

Over at The Film Experience, Nat has been hosting a weekly blogathon of sorts under the title ‘Hit Me With Your Best Shot‘ wherein bloggers are invited to join in on a conversation about a given movie and choose their ‘favorite shot’ from said movie. Needless to say, it always yields interesting conversations. While I’ve let other films I would have loved to chat about pass (including Memento & Heavenly Creatures most recently), I knew I couldn’t pass up piping in for the Beauty and the Beast evening.
This is one of the very first movies I was fixated on (I have it loaded on my iPhone for whenever I’m bored: read, whenever I’m waiting for transit, a doctor and/or my Starbucks coffee). It’s a film I know by heart and thus any type of critical distance I would ever want to have from it is impossible. It’s no surprise I’ve talked about it before and could go on talking about it forever, but for today, let’s just focus on images (gorgeous, gorgeous images!)
One of the things I love most about Beauty and the Beast is its beautiful character animation. This is not surprising when you realize some of Disney’s best animators were working on the main three characters. If nothing else, I want to spotlight the work of animators as a way to argue: look! you can make emotive characters out of thin air with no help from cutting edge motion capture technology. *Ed Note: no, there’s nothing wrong with motion capture technology, but there’s something endlessly fascinating to me about performances that come from mere paper and a pencil (and voicework!)
This is also another way of saying I’m going to cheat and give you 6 runner-up ‘character animation’ shots and then give you my fave shot:
Beast
Animator: Glen Keane
Glen gave us Ariel and would later give us Aladdin, Tarzan and Rapunzel
One of the challenges of a character like Beast is that he needs to at once look terrifying but at the same time elicit some sympathy/love from Belle/the audience. His entrance does great work for the first but I’m more interest in pivot moments like Beast and Belle’s across-locked-doors conversation: Beast gives “grinding his teeth” a new name as he tries to ‘woo’ Belle out of her room with passive aggressive pleasantries. 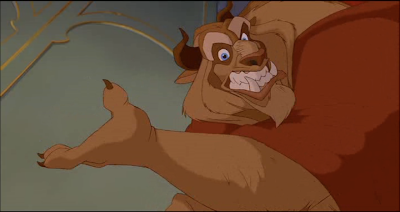 Yet, his beastly exterior begins to crumble as ‘something there’ begins to emerge, showing us a softer side (even the birds wanna play with him!) [Ed Note: this if my mom’s favorite moment in the film, I can’t count the number of times she referred to it while I was growing up!] 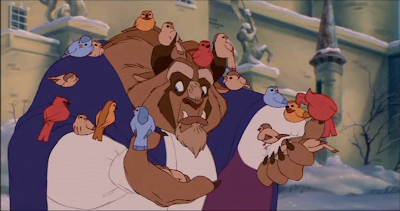 Gaston
Animator: Andreas Deja
Andreas gave us Triton and would later give us Jafar, Scar, Hercules and Lilo
One of the joys of watching Gaston on screen is seeing him try to grasp simple concepts (“how can you reeeead, there are no pictures?”) and grapple with harder ones (“Did you honestly think she loved you when she could have someone like me?”). The following comes right after Belle begins to advocate for Beast as a gentle creature. His amazement slowly grows to disgust in a matter of frames: 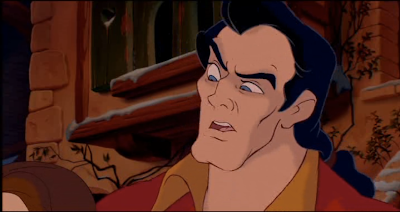 Few animated films have such an unabashedly vain and cruel villains (it’s telling that most of the humor comes not from himself but from around him: “What’s wrong with her? She’s crazy! He’s gorgeous!” whereas Ursula, Jafar and Scar have deliciously comedic roles) and this is particularly striking in his last battle with beast where his egomaniacal delusions get the best of him: 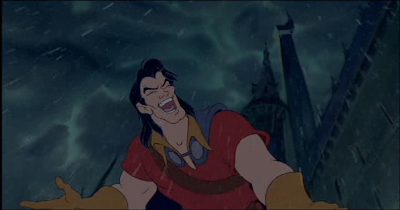 Belle
Animator: James Baxter
James would later give us Rafiki & Quasimodo
Ariel may have her voice, Rapunzel may have her hair, Jasmine may have her palace and Aurora may have her beauty sleep (and her ever-color-changing dress!) but Belle… Belle has her gorgeous eyes and her curiosity, the latter getting her in more trouble than she bargains for in the scene where she explores the ‘West Wing’ (not the Sorkin show, sadly) and finds Beast’s portrait: 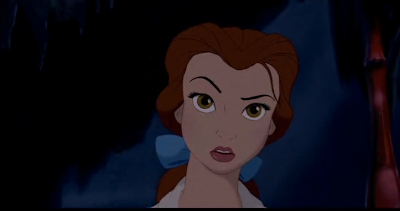 Keane nails Beast’s rakish (read: beastly) good looks and charms despite his outer exterior while Deja milks Gaston’s physique for all it’s worth but my props always have to go to Baxter who makes Belle one of the most facially expressive characters in the Disney canon (it helps to Paige O’Hara’s voice to work off of), especially in small moments where we see her self-doubt afflicting her as she finds herself attracted to a Beast: 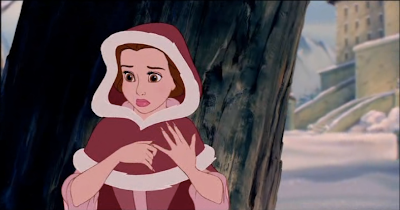 But my all time favorite shot/sequence in the film comes right after Gaston has (unsuccessfully) proposed to Belle and she gets to sing her ‘I Want’ song (y’know, like Ariel’s Part of Your World, Hercules’s Going the Distance, etc.) in a beautifully lit ‘hills-are-alive’-esque background where we see her yearning for so much more than this provincial life. 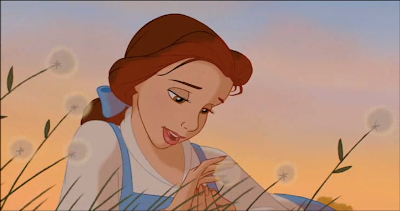