Confessions of a Shopaholic, or How 15 Random Things about the best-seller adaptation

Confessions of a Shopaholic
Directed: PJ Hogan
Starring: Isla Fisher, Hugh Dancy, Joan Cusack, Kristin Scott-Thomas, John Goodman, Krysten Ritter, Leslie Bibb, Fred Armisen & John Lithgow
15 Random Things re: Shopaholic
So I caught Isla Fisher’s Shopaholic this weekend. It was fun in that chick-flick sort of way. No ground is broken (Prada was an instant classic in my eyes, but this other best-seller adaptation will have to settle for living under its shadow) but give me some Hugh, a good cast and a bearable storyline and you’ve got me happy.
1. Isla Fisher is crazy. Don’t believe, try watching the ‘Miami dancing’ sequence with a straight face.

2. This ‘The Devil Wears Prada’ is not. I don’t know whether I really mean that in the worst possible way. Let’s see if I can put it in more understandabl
e words: Pat Field on Anne & Meryl > Pat Field on Isla & Kristin.
3. Leslie Bibb will never not-play Brooke McQueen. If you just wondered out loud who that is, I … well… I have no use for you. Do your homework!
4. Isn’t this one the most accomplished comedic
supporting casts, ever? John! John! Joan! Fred! I’m not saying they all get their due (seriously, can Joan Cusack get more work now? Also:
5. Who knew Joan was ‘mom’ material? Not me really.)
6. Hugh is pretty. That’s all.

7. Bruckheimer breaks ground… in the ad placement category. I only briefly caught the Prince of Persia poster – anyone else catch others?
8. No one does bitchy French better than Kristin Scott-Thomas. Okay, maybe Catherine Deneuve.
9. Why don’t mannequins clap for me? Ah yes. I try to avoid $16,000 in credit card debt.
10. Seeing Gilmore Girls alumni makes me happy. Hello Krysten Ritter! I love your boho SoHo look! 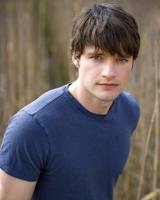 11. “If the US Economy can handle its multi-million dollar debt, you can handle yours” (or something to that effect) is probably the greatest line in the film. Oh irony!
12. Where has Nick Cornish (pictured) been all my life? He’s like a younger, hotter version of Gabriel Martinez so you know I mean business. That his imdb page show that he h
ad a role in one of my all time Buffy episodes (Helpless) only adds to my instant crush!
13. Isn’t Stephen Guarino (ie. the receptionist) hilarious? Only acceptable answer: Yes.
14. I love movies that make me feel better about living in NYC. Sure, I don’t live a life nearly as interesting as Isla’s, but still!
15. Isla Fisher is crazy. Sorry, but it’s true. Don’t believe me? Try watching the mailroom scene with a straight face.
Grade: B+