Charlie Wilson’s War, or How Sorkin and Nichols make a good match 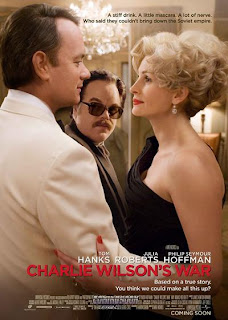 Charlie Wilson’s War
Dir. Mike Nichols
Starring: Tom Hanks, Julia Roberts, Philip Seymour Hoffman & Amy AdamsWhen you get Tom, Julia, Mike and scribe Aaron Sorkin together you’re bound to hit gold, right? That’s how everyone was profiling Charlie Wilson’s War a couple of months ago: how could you go wrong with such star-power? And though it hasn’t lived up to its astronomical expectations, Nichols’ film is actually a really good movie; crisply written, aptly acted and well-directed.
It follows the real-life story of Texas congressman Charlie Wilson as he rallies for support and financial aid to the Afghan cause (to fight ’em Soviets!) back in the late 1980s. In the current political situation (and living in a post-9/11 world) one would think the subject matter would elicit a sense of drama and seriousness which Nichols’ film seems to shy away from: with a tagline like “A stiff drink. A little mascara. A lot of nerve. Who said they couldn’t bring down the Soviet empire” and Sorkin’s quick-witted script Charlie Wilson’s War seems more like a feel-good movie than a political film. And that is both its strength and its greatest weakness. Unlike those ‘other’ political films of the year (In the Valley of Elah, Rendition, Redacted, etc.) Charlie Wilson’s War straddles finely that line between American propaganda and historical hindsight (which of course, need not be exclusive): in the hands of Sorkin, Nichols and Hanks, Charlie can be both a bastion for good American values (freedom, democracy) and an ambivalent Cold War political figure in light of the last two decades. That the movie doesn’t really make up its mind (even with Hoffman’s Zen Master fable and Wilson’s words at the end of the movie: “These things happened. They were glorious and they changed the world… and then we fucked up the endgame”) might be what makes it more interesting to me – sometimes it takes more courage for a filmmaker to do that and refuse to chastise its character’s choices, especially in a movie based on true events.
Politics aside, Sorkin’s script and Nichols’ cast make for Charlie Wilson’s War an enjoyable movie: I enjoyed Amy Adams and Philip Seymour Hoffman in particular; relished Emily Blunt’s cameo and smiled every time Julia was on screen even if she was playing a right wing fanatic… and Tom? Well, you gotta hand it to him, if only for showing his ass not even 10 minutes into the movie.