Catch Me If You Can, or How what Leo touches turns into A-list gold!

Steven Spielberg’s Catch Me If You Can (2002), based on the true story of con-artist Frank Abagnale Jr is a film I hadn’t seen since its release. Only things I remembered: it featured one of Leo/Tom’s most effortless (and humorous) performances, a quirky score and an array of great up and coming actresses. Upon re-watching it, I couldn’t help but think of the film (and its young actresses) as a lovely preamble to what are turning out to be accomplished Hollywood careers.
Inspired by Nat’s wonderful Vanity Fair series, I figure I would pay him a compliment by taking his concept/template and apply it to the women of Spielberg’s Catch Me If You Can.
And so, without further ado:
Ellen Pompeo plays a flighty flight attendant who’s quickly taken with Leo’s Frank Abagnale Jr. 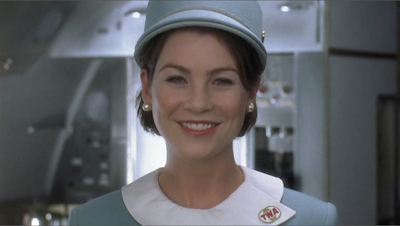 Before 2002, Ms Pompeo had been doing odd-jobs here (Law & Order) and there (Strangers With Candy). After Catch Me If You Can she still had a couple of years where she did small work (in Daredevil, who knew? in Friends?!) and it wasn’t until she was cast as Dr Grey in Shonda Rhimes’ Grey’s Anatomy and she is now probably the most well-known whiny doctor on Network TV.
Jennifer Garner plays a high-paid…er… “model” (who was on the cover of 17 Magazine) 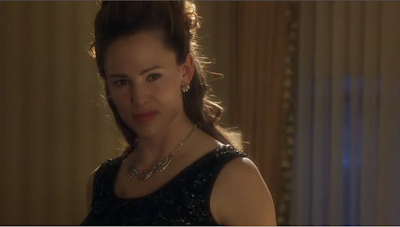 Before 2002, Ms Garner was probably best known for her work on TV (in Time of Your Life and her small role in Felicity). Catch Me If You Can came at a cross-roads moment for Ms Garner: JJ Abrams’ Alias blew up into our screens only the year before and everyone was abuzz with the spy-centered show and it’s kick-ass (and mostly flawless) first season. Daredevil would soon follow which made way for its horrid spin-off (Elektra which was not warmly received). Many would have crumbled after such a misfire, but Ms Garner has always been good at switching back and forth between comedy and action-dramas, so her rom-coms (13 Going on 30, Ghosts of Girlfriends Past) have kept her afloat. A high profile hubby and a family (hint: rhymes with Baffleck) would soon follow as well as her career-best work in a Best Picture nominee (Juno).
Amy Adams plays a braces-addled nurse whose wide-eyes are all oogly for Frank. 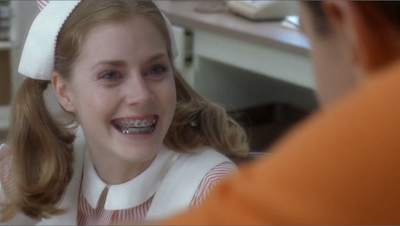 Before 2002, Adams was doing bit work around TV Charmed, Smallville, Providence) so her role as Brenda in Spielberg’s film was arguably her most high-profile role of her career. Stardom and bankability was still a while away: Amy had to wait a couple of years, but once Junebug hit theaters in 2005, well… a star was born. An Oscar nomination for this small indie film brought her into the fold and proving this was no fluke, she has since proven herself a box-office draw in a Disney flick (Enchanted), a funny girl with her stint at The Office as Jim’s girlfriend (and her parts in Talladega Nights and Night at the Museum: Battle of the Smithsonian), and with a couple of Meryl films (last year’s Doubt for which she received her second Oscar nom, as well as this week’s Julie & Julia), Adams is now squarely a bona-fide actress in high demand.
Elizabeth Banks plays a flirty bank teller who falls head over heels for Mr Abagnale Jr. 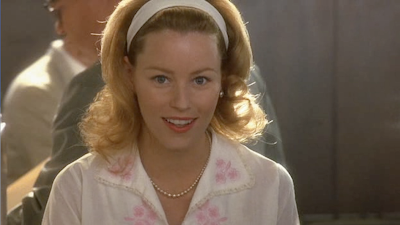 Before2002,Ms Banks had a couple of bit roles here (Sex and the City) and there (Spiderman – whose role she reprised throughout the trilogy), and while this role didn’t quite catapult her anywhere (nor did her role in Best Picture nominee Seabiscuit the following year), she has been working hard since. One could argue that Ms Banks is still waiting for that one big breakout role but solid work in comedies (Meet Dave, The 40 Year Old Virgin, Fred Claus) and some dramas (Heights) have made her profile a bit more public.Everything suggested that 2008 was going to be bigger for her with a high-profile role in Oliver Stone’s W. as Laura Bush, a suggestive Kevin Smith comedy (Zack and Miri Make a Porno) and a raunchy comedy role (Role Models) but not even this three-punch was able to materialize into anything other than some magazine profiles here and there.
BONUS:
Can you guess who’s one of the lucky gals who gets picked as one of Frank’s Panam girls? 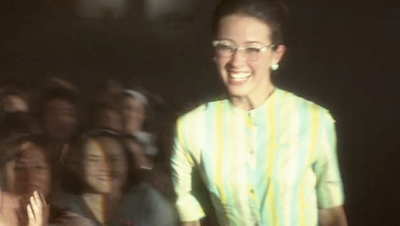 Yep!
Fred/Illyria herself.
Or Whiskey/Dr Saunders herself.
Or, as imdb.com knows her: Amy Acker who before this smallest of roles didn’t have much to show for her resume (and this hardly counted, I’m sure) but who had come crashing into fanboys’ lives only months before with the introduction of Winifred Burkle in Joss Whedon’s Angel. ItseemsMsAckerismoreathomeingeek-fulshows(with stints in Alias and Dollhouse coming after Angel fadedaway) andwhose next project includes Happy Town on ABC this fall looks to follow on those same eerie, fringe-y footsteps.
Average age: 29
Collective Hardware (Emmys/Oscars/Golden Globes) stats before Catch Me If You Can: 0.
Collective Hardware (Emmys/Oscars/Golden Globes) stats after Catch Me If You Can: 2 Oscar noms (courtesy of Ms Adams), 6 Golden Globes noms (3 for Ms Garner, 2 for Ms Adams and one for Ms Pompeo) and 1 Golden Globe win (for Ms Garner in her first season of Alias)aswellas4Emmy nominations for Ms Garner. Ms Banks only has an ensemble SAG nod while Ms Acker is a Saturn Award winner (as is Ms Garner) and a multiple nominee.
Fame levels in 2009, according to famousr, from most to least: Jennifer Garner, Ellen Pompeo, Amy Adams, Amy Acker, Elizabeth Banks.