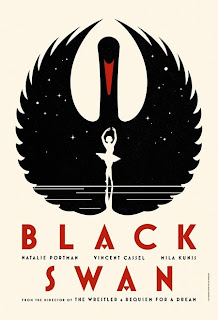 Black Swan
Director: Darren Aronosfky
Written by: Mark Heyman, Andres Heinz & John McLaughlin.
Starring: Natalie Portman, Mila Kunis, Vincent Cassel, Barbara Hershey, Wynona Ryder.
If you’ve been following me on Twitter (and let’s face it, you probably have since I’ve mostly abandoned the blog… real life and school has beckoned – I’ll try my best to keep it pseudo-active, I promise!) you know I was obsessed with Aronosfky’s Black Swan even before it came out. This would usually have led me to overhype the film to an absurd degree and in the end found it wanting. But quel surprise! The film lived up to my crazy (mark my word!) expectations and I’m probably MORE obsessed now, not least because the film combines so many things I adore both personally and academically.
I could probably go on for hours about how Natalie’s performance is as bit an achievement as everyone has been saying (compare the scene where she calls her mom from the bathroom to the fight scene in the dressing room and not only do you notice this is a thespian in full control of her body, her voice and her performance, but someone fully committed to the part, even though it takes her from one extreme to another – usually in less than it takes the camera to blink and catch her on the mirror!). The supporting cast isn’t far behind, giving us a complex Mommie Dearest, a doppelganger worthy of Nabokov, a sexy/ual choreographer and a drunken, broken and past-her-prime Wynona (which, you gotta admit, is a great casting coup in it of itself).

I could also go on for hours on the beautiful cinematography and on Aronosky and Libatique’s choice to film with hand-held cameras, usually keeping us behind Nina’s head, as if we were at once stalking, preying and encouraging her. This is particularly effective in the ballet sequences which forgo the usual fourth wall/from the audience POV and instead place us alongside Nina/Natalie, giving us a real sense of the physicality and intensely emotional ride that is dancing in front of an audience.

But instead I’ll simply ask you to go watch it and experience it for yourself, and find yourself being plunged into a frenzied film that can only be described as a ‘balletic horror film’ (or would a ‘horrific ballet film’ be more appropriate? Clearly, in the world of doppelgangers and mirrors that Aronofsky creates, the distinction becomes mere semantics). A