Best Supporting Actor 2009 or How ‘Madness’ is the Word

A Blog Next Door’s Oscar coverage 2009: For the lit theory junkie in me and the Oscar watcher in you.

We all know that Oscars are about many things, least of ’em being anointing what is ‘actually’ the Best of the Year. They celebrate ‘careers’ (LMS’s Alan Arkin), achievements (NCFOM’s Javier Bardem), a wonderful year (S’s George Clooney). But mostly they also celebrate great characters and in any given year we could ask: what is it about these characters that gets AMPAS all riled up? To take the list of men vying for Heath’s er… I mean the Supporting Actor Oscar is to be immersed in a Foucaultian World. (I told ya I’d be tapping into my inner Academic; y’know, what I actually do for a living!)

The Joker, John Givings, Dan White, Father Flynn and the ‘dude playing the dude disguised as another dude’ are all men at the fringes who explore and enact what it means to inhabit a body that is over and over branded as Other. 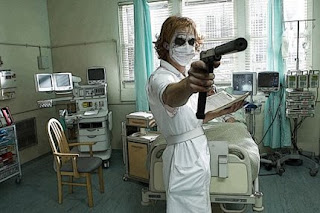 Heath Ledger – “The Joker” in The Dark Knight
You are what we are not, Gotham declares.

Gotham’s scariest villain is as much a product as he is a symptom of the ailing world that Batman is trying to salvage. Where Batman is order, The Joker is chaos. Heis himself the fringe, the limit and with his scars, his cackle and his relentless cruelty he showcases everything we seemingly purge from society but by his very being Heath’s Joker reminds us that we have never escaped our own bruised society. He may seem like a force of nature, but he’s ultimately the suppressed culture coming back to claim the center of society from which he has been banished. 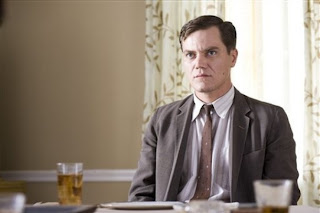 Michael Shannon – “John Givings” in Revolutionary Road
You are not what we want to be, Suburbia pronounces.

Suburbia’s most threatening force finds it’s home in the mental patient John Givings who spouts truth wherever he goes but because society (pristine, pure and orderly as April’s dresses, Mrs Givings yard and Milly’s snacks) has decided it is unseemly to say sun things, John’s words are lost in the deluded void that is his father’s hearing aid and his mother’s natural deafness to truth. His mental health is as much a lie and a construction as April and Frank’s ideal home, but while a ‘normal’ society sees the Wheelers as a necessary aspect of life, John and his kin are labelled and discarded into the ‘Mental Institution’ where they’re words can be sanitized with the language of Science. 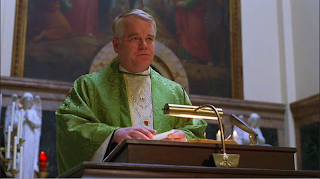 You are not what we are about, sentences Sister Aloysius.

Father Flynn is a curious case becuae of the relentless ambiguity of Shanley’s script (though sadly not his direction). Here is a man conflicted by the accusations headed his way and potentially by a sexuality that his own Church deems deviant an therefore imperfect. It is thus why we get the sermons on Doubt and Gossip and why sideway glances at young boys are so suspect even for us as an audience. But in a religious world that requires moral certainty, Father Flynn has no place. But more importantly thy Sister Aloysius cracks Father Flynn’s facade with hollow accusations and a made up phone call only bring to the forefront the double world of Father Flynn. This is a world that does not take him for who he is, nor for who he fashions himself to be. 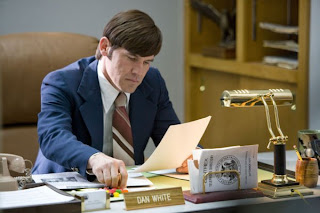 You are what I am not, says Dan to Harvey with a couple of shots to the chest.

Dan White is also a curious character because just as Father Flynn he has internalized a set of rules and ‘Thou Shall Not’s that disable him from full-fledge happiness. In Harvey he sees everything he wishes banished from his own body (remember that sad moment of him naked and desolate). As Harvey’s self-apointed foil he cannot function without seeing what he could (have) be(en). And so begins a cruel derailment into violence – the only way he sees as an escape from that cultural iron cage which society has built and nourished for him. 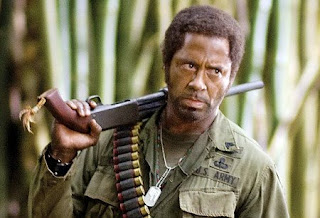 Robert Downey Jr – “Kirk Lazarus” in Tropic Thunder
You are not what we are, but we’ll gladly watch it and award you for it, says Kirk’s audience.
And then we have the performer of the crowd: Kirk Lazarus playing Sgt Lincoln Osiris. But compared to the deranged and damaged souls of Gotham, Suburbia, the Church and (hetero)Society, what to make of this ironic blackface performance? In a way it returns us to a more racially tinged version of the other characters. Physically transforming himself into Osiris, Lazarus is at once enacting and commenting on the hierarchical race relations of America. All the actors in Tropic Thunder to an extent shine a light on the way the ‘fringes’ of society are easily sanitized and commodified (I’m looking at you Simple Jack), churning out Hollywood Oscar-bait flick after Hollywood Oscar-bait film. It isno wonder that the ‘performer’ in the crowd offers the meta commentary on the Foucauldian project that I see (quite glibly) taking shape in the Best Supporting Actor Category.
Next: Freud and the Leading Ladies