Beauty and the Beast, or How Everything I Know I Learnt from Animation

March 5, 2008 · in Everything I know I learnt from Animation 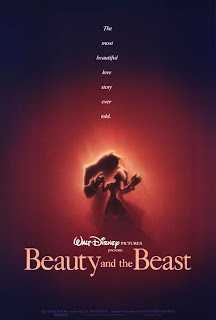 This might just be the greatest animated movie of all time (and, for all those who love statistics and trivia: it is the only animated feature to be ever nominated for Best Picture at the Oscars – how Toy Story didn’t manage to repeat that feat in 1996 is beyond me, I have yet to see that pig movie, but I can’t anticipate liking it more than John Lassetter’s brilliant toy-movie; of course there are a couple of other animated features that might also (read: should) have been nommed. I am thinking of Ratatouille [which reaped a total of six nominations and one win!), but now that the Academy has ghettoized animation Beauty and the Beast‘s surprise (but well-earned) nomination might never happen again, though I have high hopes for Wall-E) But I digress.
I have seen this film far too many times – it was a staple at home on lazy Sunday afternoons, and the VHS was constantly on top of the VCR throughout all my summer holidays. You probably don’t understand how much I love this movie: I wished I had musical numbers happen around me, I wanted to be Lumiere, I longed for Belle’s library, I dreamed of owning Beast’s castle… and I wanted nothing else than to beat up Gaston (whoever said a good Disney villain makes a movie might not have been thinking of Gaston, but oh how I love to hate him!)
So, without further ado I give you 7 Things I Learnt from (re and re)watching Disney’s Beauty and the Beast:1. Reading is important – it teaches you everything you need to learn to be able to look down on ‘simple townspeople’ and fantasize about far out places, daring swordfights, magic spells and princes in disguise ::sigh::

2. Heterosexual men are dumb. Throw rocks at them (or maybe just their stinky muddy boots). Okay, maybe not all of them. Just the hunting type het-men who eat five dozen eggs for breakfast and have incredibly thick necks. 21st Century Gastons: protein shake gym/athletic jocks ::barf::
3. Brunettes > Blonds. Especially when brunettes read (See #1) and blonds just swoon and come in packs of three ::rolls eyes::
4. Servants want to serve me. They wish I were they guest! “For a servant who’s not serving/ He’s not whole without a soul to wait upon” sings Lumiere, and I’ll believe anything a flaming (candle)stick tells me ::wink::

5. Beauty lies within. I know, it’s a cliché, but if anyone has a patent on clichés, it’s good old Walt – so I’ll let ‘im have this one ::smile::
6. It logically follows then that Prince Charmings come in all shapes and sizes. Yep, no need to wait for an Eric or a Phillip – B&B teaches us our Prince Charming might be buried under a rough and hairy exterior, y’cubs out there taking notes? ::smirk::
7. “If it is not Baroque… don’t fix it” ::tongue in cheek::

Also, on the more practical side Belle and her friends taught me that

– books should be kept away from sheep (they’ll chew on everything!)
– I shouldn’t go out into the winter cold where wolves abound (unless I have a certified Beast bodyguard)
– mobs don’t mesh well with such bizarre things like ‘logic’ and ‘witness accounts’
– I shouldn’t plan a wedding without proposing first
– everything is a weapon (scissors? okay true… boiling water? yah, I’ll give you that… but a makeover in a closet? that’s impressive!)
And many more…