Away from Her’s Fiona and La Vie en Rose’s Edith, or How Oscar’s Women scorch the screen

Sure, Oscar’s Men this year are clearly not to be messed with – but what about the girls, ahem, I mean women?
I recently caught Sarah Polley’s Away from Her and the Edith Piaf biopic La Vie en Rose (bringing up my Best Actress nominated films viewed to a healthy 3/5 – I’ve yet to catch Elizabeth: Golden Age [yawwn] and The Savages). Since I’ve already swooned over that Reitman-directed film and its young starlet – even if I was more enthralled with Jen rather than with Ellen, I thought I’d offer my two cents regarding the films that seem poised to take the Best Actress statuatte. Old vs New. Original vs Mimicry. Established vs Newcomer. Anglo vs French. So many ways to break down the Julie Christie vs Marion Cotillard faceoff; but why not just enjoy the fact that they have both crafted tragic women who’s mind and body unravels before our eyes in a beautiful fashion?Away from Her (Dir. Sarah ‘The Sweet Hereafter’ Polley) 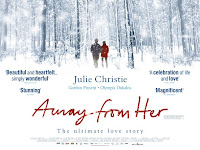 Polley’s directorial foray (based on a short story by fellow Canuck Alice Munro) follows Fiona (Christie) and her ‘devoted’ husband Grant (Gordon Pinsent – my only quibble with the film) as she gets diagnosed with Alzheimer’s. A film that could have just as easily been a simple acting showcase for Ms Christie (and it is) is also a great exploration of marriage, memory and the intricacies of that ephemeral thing people (especially given this past week’s festivities) call “love.” Polley has written a tightly structured film that moves the audience along in a stream of consciousness-like rhythm – and how organic the entire film feels, privileging contiguity to causality, and visual/aural motifs over narrative linearity; and she directs it with a certainty that I personally did not expect from a Dawn of the Dead alum. Christie, being the acting legend she is, owns the screen [ed. note: remind me never to use such clichéd jargon again] – whether she’s unloading 40 years worth of guilt in a car ride (with such grace and poise!) with a single sentence, blanching over not remembering the word for ‘wine’ or simply staring blankly into Grant’s eyes and naively repeating the same old sentences that pain him and keep him at bay. To sum up: Away from Her is painfully beautiful, quintessentially Canadian (the houses! the snow! the outfits!) and if Christie grabs the golden man on Feb 24th I’ll be cheering – if only because I want a repeat of her wonderful SAG speech (“And if I’ve forgotten anyone… it is because I’m still in character” Brilliant!) A-La Vie en Rose (Dir. Olivier Dahan) 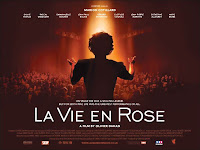 When I finished watching La Vie en Rose all I wanted to do was get to my laptop and fill my iTunes with Edith Piaf’s music. That is, of course, as much (if not more) of a testament to Piaf’s music rather than a mere commentary on the film, but one can’t fault the film for greatly showcasing the songstress’s theatricality so successfully so as to elicit such a response from me. Biopics aren’t really a genre I enjoy watching, but every once in a while one will come around and remind me how they can be done well. Not without its faults (its length was my biggest complaint, but I did enjoy the interesting flash-forward/backward approach over a linear narrative structure), Dahan’s film is an interesting re-telling of the falling from grace of Ms Piaf – and one has to wonder why Dahan and Cotillard give us so few scenes illustrating Piaf’s power and instead focus on her interesting and tragic youth and her health-addled ‘old’ age. As a musical and performance showcase La Vie en Rose is a wonder to watch – and seeing Ms Cotillard go from unruly Edith to drama queen La Mome is a treat (the entire NYC-Marcel part of the film was a highlight – oh the happiness, oh the sadness) only made sweeter by Piaf’s songs, which underscore the entire film. B+