Alison Bechdel’s Fun Home, or How "Cartoons are like maps" Part 1 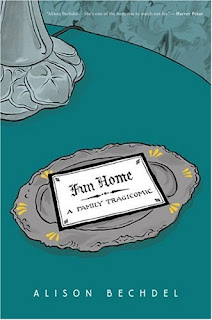 One of the things I really do love about the English Dept here at Rutgers is its incredible ability to have something happening every week (if not every day!) This Wednesday, for example I had the pleasure of attending the Alison Bechdel lecture/ presentation/ reading hosted by the Writers at Rutgers Reading Series (click here for more info) and thought – because I haven’t been as prolific in my “Rutgers” blog posts as I was last term – that we could all revel in my fanboy-ness and (re)live the event through my (albeit limited) talents as a blogger.
Here goes, my ‘retroactive live-blogging’™ for the event:

The evening began with the mandatory ‘Thanks to everyone who made this possible’ spiel, given by the soft-spoken (though, if I may so myself at the risk of sounding too much like a groupie – also brilliant) Richard Dienst. Following Richard, was a wonderfully witty and hilariously deadpan introduction by a former Rutgers Alum Hilary Chute. In her own words (and quoting her editor at the Village Voice at the time when Hilary wanted to interview Alison) she traced Fun Home’s rave reviews (named one of the top books of 2006 by TIME, EW, the NYTimes and People – yah, try finding another book not bearing a certain Ms O’s sticker that can cut across such diverse print behemoths!) and introduced her, not without offering a rave review as well: “I was … blown away.” And I couldn’t have said it better myself.

[Sidenote, though not really: First thing Alison said once she got to the podium, “Look at all these people!” /end Sidenote]

Later in the talk [and I know, this entirely violates my whole ‘retroactive live-blogging’™ approach] Alison said that the one thing she feared the most was to bore people. I can safely say (and the seemingly endless and overwhelming applause at the end of the talk seemed to agree with me) that she didn’t bore anyone, nor could she. I mean, we are talking about a woman who wrote the bitingly sad (and funny!) Fun Home and who, in the middle of the talk, still had the grace to comment on Richard Miller’s boisterous and greatly welcomed laugh. Boring is not something I think she’d be able to provide: not to a rapt audience at Rutgers, and not anywhere else. 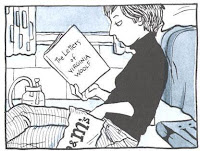 Tracing her own ‘coming into being as a graphic novelist,’ Alison talked about the way the comic-book form, by bridging the gap between image and word, was the best outlet with which to both rebel against her parents (who wanted her to be a writer or an artist, never thinking she’d go with both!) and be able to live in that space between image and text. If language is deceiving and images shroud themselves in appearance, what better way to get beyond, within that, than to embrace the comic book form?

Like maps, she said (here also reminiscing about The Wind in the Willows’ map we get in Fun Home) comic books offer a layout of words and image that apprehend reality and bridge that Saussurian gap Bechdel had been so suspicious of ever since she was a little kid, littering her diary entries with squiggles to mark the ways she wasn’t sure what she was writing was accurate, real, true.

For more on this event (the reading and the Q&A session) check here and you can check Alison’s blog here: