AleXY, or How Queer is MODE? Pt 2 Alex/is Meade

How Queer is Ugly Betty? The obvious answer is ‘very much so!’ – I mean, a soap opera comedy about a fashion magazine? It screams homo, doesn’t it? And indeed, as we saw with Marc St James that Ugly Betty actually embraces the stereotypical gay, now how does it fare with the “T” in LGBTQQ(etc) acronym? 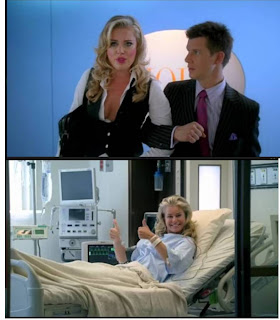 If Marc is the stock gay character we see ‘everyday’ what is Rebecca Romjin’s Alex/is Meade? I am a firm believer that the first half of Season1 of Ugly Betty toyed around with the mysterious lady until they decided that they were going to make her the long lost (other) Meade brother… ahem… sister. Yes, I do have to give Salma and her peeps props for presenting a trans character in primetime tv (and such a pretty one too – far from another trans character that made a splash only two years ago – Felicity Huffman in Transamerica). Yes, waltzing in to MODE Magazine, Rebecca’s Alexis was a confident, driven MTF. One only had to wait a couple of episodes to see how inadequate the character would prove to be when it came to smart and P.C. writing.
Take for example this season’s turn of events: after suffering from some sort of amnesia, Alexis woke up as Alex (ie. with no memory of having gone through the sex-change operation). Interestingly, instead of working through Alex’s initial trials and tribulations of wanting to undergo sex-change operation (which we were told is what split the happy Father-Alexis relationship) the writers decided to play Alex/is as a “man trapped in a woman’s body” – a man who loves the fact that he has breasts now, enjoys football and doesn’t know how to walk in heels or wear makeup and seems unaware of the fact that he wanted to become a woman to begin with.
It works for comedy but it also flattens the character a bit. I will say that the whole ‘Dawson plays it hip and wants to screw over Mode over being a prejudicial prick’ at least tries to make up for it. So, while the writing for the character (just like any other character in the show, actually) works as a caricature and better as a gag than as a politically correct ‘representation’ I do commend ABC and Salma&co for wanting to give exposure to minorities on tv (when has one show showcased such a cultural/racial/sexual diverse cast I wonder?).