After Sex? or How Writing since Queer Theory is Theorized Queerly Pt 1

After Sex? On Writing since Queer Theory

Kicking off the Rutgers English Sexuality Speakers Series, we welcomed to the Rutgers New Brunswick campus a handful of respected scholars working in the field of ‘queer theory,’ celebrating the publication of the special issue of SAQ entitled ‘After Sex? On Writing since Queer Theory’ and despite trying to trivialize the event, here goes a post dedicated to what I enjoyed about the talk.

After a slew of introductions and thanks, Michael Cobb took to podium and kicked off the event:

Michael Cobb
Apologizing for his rather casual presentation last time he was at Rutgers, Michael came prepared this time with a talk focusing on privacy and the couple – a nice companion to his piece on ‘loneliness’ (and ‘singlehood’) showcased in the volume. Swiftly moving from American Law, to Wizard of Oz references (in talking of how “there’s no place like home,” where both the concept of home and of privacy were contested in a queer context) to an attentive reading of Woolf, Michael kept the conversation light enough and even garnered some laughter (“and” is a terrible word sometimes, he quipped) in a presentation, that while a bit too formal (matching his suit and glasses) still proved to be a good start. I particularly enjoyed his discussion on ‘the ‘tyranny of two’ (which reminded me of my favourite passage from his essay – his suggestion of appending an S to the LGBTQ… acronym to stand in for “singles” as yet another sexual minority) and the ways in which ‘two’ makes the private public – what happens when you’re only one? Ending with the epigrammatic “When you’re in love with someone else, you lose your privacy” Michael stepped down and opened the floor for Lee to begin: 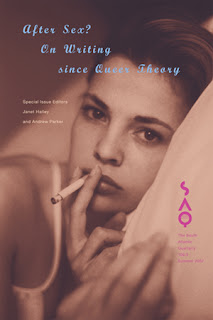 Lee Edelman
Unaided by a script or even notes, Lee maintained the attention of the audience with the eloquence and ‘airtight’ theoretical model of thinking that was later to be criticized by a fellow member of the panel. Picking up on one of Michael’s lines (“They’ve lost their protection of home”) Lee pursued a rather hostile (abrasive?) take on ‘queer theory’ and the nostalgia of the volume, as well as its narratological framing (issues and questions that, for anyone familiar with Edelman’s work, were not surprising). Lee argued for a concept of queer theory that does not look back on its ‘founding texts’ and a locatable ‘origin’ (circa early 1990s) and revels in nostalgia for a time where we didn’t just look back in time and think of the time where the Academy was doing something. This nostalgic looking back, this reading queer theory in a narratological sense is unnerving for Edelman mainly because it fosters an optimism and a sense of home that he does not endorse – to work in queer theory is to lose one’s sense of home. The ‘Edelmanian line’ (as opposed to the suggested Bersanian line that Halley and Parker suggest in the Introduction) works to disentagle this appraisal of ‘goodness’ (optimism, a vision of hope, of a horizon) in queer theory, that for Edelman negates the project of queer theory itself.

Joseph Litvak
Following Lee – being ‘after Lee’ must be hard. Unless you’re Joe Litvak and then, with a theme like ‘After the Jew’ you know you can steer attention back to your work while the audience is still reeling from Lee’s electric musings on Queer Theory and in particular his opinions regarding the framing and structure of the volume (but more on that later). “I will be incoherent” he began – clearly contrasting his own method of delivery with Lee’s suspiciously understated eloquence. After savouring the word ‘resentiment’ more times than I could count, Litvack went on to flesh out what was ‘queer’ about blacklisted Hollywood Jews in 1954. If Lee had suggested we could say Plato and Shakespeare were footnotes to Queer Theory (or was it the other way round? I should have taken better notes) and could be placed at the ‘beginning of Queer Theory, as opposed to the Queer triumvirate of Sedgwick, Butler and Warner; Litvak wanted to suggest we could also see the McCarthy era as creating one of the first notions of queerness in the figure of the Jew. The salient portion of Litvak’s talk actually came towards the end when he veered away from his own project and suggested that one way we could think about current Queer Theory – as a provocatively autobiographical and writerly methodology: a stylistic marker rather than a theoretical one (which this humble grad student wishes had been fleshed out by other panelists).

Check out After Sex? or How Writing Since Queer Theory is Theorized Queerly Pt 2